More divisions are opening in the LGBTQ communities with two gay members of the West Hollywood City Council suggesting the city look to someone other than Christopher Street West to stage the annual Pride parade and festival, and one of them criticizing the painting of the transgender flag in the intersection of Santa Monica and San Vicente boulevards.

At tonight’s City Council meeting, Councilmember John D’Amico raised the idea of the city issuing a request for a proposal for next year’s Pride event from other vendors, citing controversy over CSW’s plans to stage a march in West Hollywood to protest police violence against Black people.

Councilmember John Duran agreed with D’Amico and described CSW’s plans for that protest march as “reckless” because it hadn’t consulted in advance with the City of West Hollywood, which has helped underwrite the Pride parades and festivals that take place in June each year. Duran suggested that the City Council remove “CSW” from the name of its CSW/Pride subcommittee, which consists of two Council members who negotiate plans for the event with CSW.

“You don’t work with a partner by just dropping an event into the middle of the city with 10 days notice,” Duran said, referring to CSW’s proposed June 14 protest march. “I think it was irresponsible. I think it was reckless.”

CSW had announced the protest march on June 3 after earlier cancelling what would have been the 50th annual Pride parade and festival because of the COVID-19 pandemic. Faced with pushback from some Black community leaders who said they had not been consulted before the march was announced, CSW dropped its plans for the protest.  Then members of the “solidarity march committee” that CSW had created to plan the event stepped forward and launched the “All Black Lives Matter” protest march. That march on Sunday attracted an estimated 20,000 or more people and was the largest public event ever in West Hollywood.

The All Black Lives Matter march began in Hollywood and ended at the intersection of Santa Monica and San Vicente boulevards, which are the site of two rainbow colored crosswalks installed in 2012 at a cost of $80,000 in honor of the LGBTQ communities.  On Saturday night, people had gathered to paint a large blue, white and pink image of the transgender flag in the middle of the crosswalk. Those participating in the protest march also called out the names of Black transgender people who have been killed recently.

“I don’t think we can tolerate any group coming in and deciding what sort of painting or mural they can put on our public property.” Duran said that it should be removed.

Suggestions that the city seek another vendor for the annual Pride parade and festival may bolster arguments by some LGBTQ people that it move out of West Hollywood and into downtown Los Angeles, which now hosts its much smaller, but very popular, DTLA Proud event in August.  The annual Pride event has a major economic impact on the city. A study commissioned by CSW showed that it increased economic output in Los Angeles County by $74.7 million of which $27.7 million was concentrated in West Hollywood and $18.2 million in the City of Los Angeles. Economic output is the value of goods and services provided during the Pride event.

The Pride parade started in 1970 on Hollywood Boulevard and in 1979 moved to West Hollywood, which had become known as a gay mecca. CSW, a non-profit organization, has managed the parade and the festival, which began in 1974.

I think it is fair to say CSW has lost touch with the residents of West Hollywood and the city council has the right to ask for bids from other organizations who could handle Pride just as well or even better.

It looks like CSW has gotten complacent with running Pride,so it is natural to look for other partners to run the event.Maybe all the trauma of the last two weeks will make them sit up and reconsider how they are operating.

Having events that commemorate queer history centered in the historically queer city of West Hollywood is important and necessary for affirmation and remaining a beacon of queer life for people coming to and living in West Hollywood.

This means that THE CITY has taken ownership of the Pride events. If they really want it, let them put it on.

Only problem with that is it will require 20 staff people devoting 2 days each week to the annual event (at city employee pay rates).

So let other approved groups put a few colors in the middle of SMB/SVB every few months. Rotate them like a Bruce Jenner Wheaties box. And have Caitlin Jenner herself paint the next trans logo in the intersection. During traffic. At rush hour…. 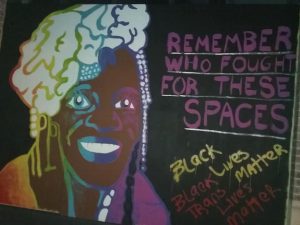 The majority of WH residents…..don’t want the parade here at all. Maybe move it downtown.

I can guarantee downtown residents don’t want it either. They deal with enough

The parade is the most legitimate and best part of the weekend. It’s the huge Music Festival that needs to go to DTLA.

I’m appalled by the reaction to call for the removal of the Trans Pride flag. Does no one remember who was brave enough to stand up for us at Stonewall? Our Trans sisters Marsha P Johnson & Silvia Rivera!   It is time we stand together with them as loudly and as proudly as they did for us.   And for those who did not attend the city council meeting, I invite you to listen and watch as Duran aggressively attacks the mayor, talks over other council members and treats the public commenters with contempt. Truly his only reason for… Read more »

And 80K for the rainbow crosswalks?? I would have done it for 75.

The transgender flag symbol was obviously painted for the protest with common paint supplies rolled on to the asphalt. It will not withstand the vehicle traffic on Santa Monica Blvd. It should be removed by traffic volume alone, but if the city lets this stand, it will encourage others to do the same. How would a bright red MAGA mural go over in WeHo? If the city council wants even more visibility for trans lives, it can do so officially. Leaving this in the intersection does nothing but encourage more of the same and we may not like the messages.… Read more »

Hell has frozen over, as I find myself agreeing with John Duran.

There is no valid reason why Christopher Street West (an awful name for a vibrant West coast gay community) continues to have a monopoly on Pride.

The RFP process is totally warranted. If CSW makes the best proposal, then go with them. RFPs allow for creative ideas that otherwise get suppressed.

Awesome Weho
Reply to  Steve Too

If you don’t like the name Christopher Street West, you can take it up with Rev. Troy Perry, who chose it in 1970 when applying for, and winning, the world’s first gay parade permit. He’s still ailve and I’m sure he’d love your opinion.

would Rev Perry want a covid party in weho from this hijacked event. Would he want boarded up buildings – YOU ASK HIM

Steve Too
Reply to  Awesome Weho

Just because a name made sense in 1970, doesn’t make it the best representation 50 years later.