EDITOR’S NOTE: The following is an op-ed written by a candidate in the Nov. 3 election for one of two seats on the West Hollywood City Council. WEHOville has invited each of the nine candidates to submit up to two op-eds to explain to West Hollywood residents his or her stand on local issues .

This election is about the FUTURE of our great city not the past. It is time for new voices at the table that are progressive and expand representation. We need new leaders who will prioritize our residents. That means creating opportunities for people to live and work in our city with better wages, providing critical resources to our small business owners who are struggling to keep their doors open and to our renters to help keep them housed while expanding outreach and mental health services to help get our unhoused neighbors into the housing and care they need.

I will bring a fresh and independent perspective to City Hall but I also want to introduce a new approach to make City Hall more responsive and inclusive. As an immigrant, a small business owner, an attorney and a woman, I will bring a different set of life experiences that will hopefully broaden the horizons of the City Council.

Being elected to City Council is an honor and a responsibility and it should be treated as such. It is a commitment to serve the people, not a bully pulpit for self-promotion. I understand that the most important aspect of leadership is the ability to listen. We are a representative democracy, and in order to properly function, elected officials need to listen to those who elected them. I want to see the city reform its public processes so that residents are actually empowered and included in the city’s decision-making process in a meaningful and respective manner. Unfortunately, this is not how City Hall has functioned, which has caused divisions and divisiveness within our small town.

While I believe West Hollywood needs new development, we need to ensure that such development is responsible and provides meaningful jobs and opportunities as well as fits within our urban environment.  For too long there has been a cozy relationship between the City Council members and developers.  The result is that tens of thousands of dollars are being funneled directly into campaigns from developers and their families to re-elect the incumbents.  These contributions legally skirt campaign contributions limitations and ultimately undermine our local democracy.

I want to make sure decisions are made in the light of day. We have seen how “development agreements” negotiated with developers, behind closed doors, and without public input have undermined our General Plan and have resulted in developers getting millions of dollars in unwarranted development rights. Recently, we witnessed how City Hall was duped and the Council outwitted by the development agreement with AKA West Hollywood, which resulted in the loss of much-needed housing and costing the city hundreds of thousands of dollars in legal fees. Headlines like that put into question our supposedly “experienced” Council members.

Unfortunately, when your Council members have such cozy relationships with developers they lose sight of what is best for the city.

I will fight to protect those long-term tenants who are subjected to unrelenting harassment from unscrupulous landlords. We need to provide better legal protections for tenants and a stronger tenant harassment ordinance. We also need to re-prioritize our budget to provide additional funds to assist tenants impacted by COVID-19 and enhance our social services.

I want to review our law enforcement budget and ensure we are getting value for our tax dollars. I want to expand our Ambassador program to enhance neighborhood protection. West Hollywood has one of the Sheriff’s Departments most lucrative contracts, and I want to use that leverage to work with other contract cities to bring meaningful reforms. Unlike the incumbents, I have not sought the endorsement of ALADS, the deputies union, because I believe during these historic times, City Council members need to be independent in order to find transformative solutions to law enforcement.

I have for decades advocated for the rights of people whether it is for LGBTQ rights, worker’s rights, renter’s rights, women’s rights, immigrant’s rights, and social justice for Black, Indigenous and people of color because I have lived and experienced as a member of these communities. That is why I am running a people-powered campaign without taking a single penny from developers. And once elected, I will serve with compassion and accessibility. Together, we can make West Hollywood SHYNE! I look forward to earning your vote!

Congrats Sepi on your big win!

No serious people run for city council.
It’s embarrassing enough to have WH as your address……but to be involved in the silliness of this city is a bridge too far for most.
You just have to roll your eyes when you read these people’s bio’s.

Very impressed by her!

She is honest, forthright and cares. We need change in WEHO and female voices at City Hall. Business as usual is dead, vote Sepi, I did

As an involved resident having a hard time grabbing ur perspective. I’ve never seen you at a planning commission meeting to talk about any development yet you shun without offering examples. You distance yourself from the sheriffs and police as if they are bad, and seem like a candidate who offers grievances without actual plans to solve any problems.

Sepi Shyne is the change WEHO needs. It has been an interesting race so far, watching some exhibit their misogyny against a completely qualified candidate. It will be a huge benefit to the citizens to have an ally for Councilmember Lauren Meister(who is the only current member who has not taken money from developers) when it comes to how this city views development. Sepi is not AGAINST development but it MUST be responsible, particularly when it comes to climate change and what we as a community need to do to help reduce our carbon footprint. Thanks for running for office,… Read more »

Sepi and Marco got my votes and that of most of my neighbors.

Sepi reminds us that we have a choice between the continuing the dysfunctional status quo, bringing in a recycled version of the status quo, or look to someone who offers us a glimmer of a better, more responsive City Hall. Although I have many friends in the race, Sepi remains my favorite because of her balance of life experiences, knowledge and maturity that are characteristics of a good elected official.

Steve, you’re joking right? And who is Sepi “Shyne”? This person is a total fake and you’re falling for the scam.
See her own bio from her own website. You want to put someone on the council who thinks you can solve problems with crystals and “Manifest Love” body butter?
If she slips in and manages to get a seat on the council, I can’t wait to see the shock and awe on your face when she fails miserably. Real problems require real solutions, not a “Chakra Balancing Reiki Charged Crystal Set.” 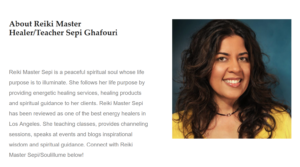 I don’t understand how she’s fake or how it is a scam-please explain “Nazanin”…Sepi is also an attorney. Reiki displays her empathetic side to help as a healing modality.

I concur. I appreciate that she is an attorney and has a spiritual side. Have you heard her mention crystals in any campaign speeches? Exactly: there’s a time and place. She knows when to employ appropriate responses

Agreed. We could greatly benefit from having more spiritually “balanced” individuals in our midst and beyond. Among other things it has a god chance that folks will gain more awareness and not behave in such defensive and reactive ways.

First on the list…law enforcement and the Sheriff Department in particular. They and the public would also likely benefit from a mental stability exam. Most of these problems are exponentially self perpetuated by bad actors of many stripes.

A great candidate! We need lesbian representation on the council. Hooray for Sepi!
Paul & IreneOppenheim

Cry me a river

She says she wants to do lots of things but I’ve never seen her speak at a city council meeting.

Weho Citizen
Reply to  Cry me a river

I’ve seen her speak @ MANY. I have attended meetings with her to watch her speak

Sepi Shyne is the reason I was able to get my money back from a person who committed fraud towards me that damaged me emotionally. Through her encouragement and persistence I was able to get back my dignity and strength. She really cares about people and making a difference. She’s done it through course of action and not just words. I really feel she will execute an amazing plan for Weho based on my personal experience to make a difference. She is genuine and cares about her community. She’s passionate about making a difference.

Sepi says with much more tact, diplomacy and kindness that which I’ve been saying for years–city hall operates with an imperiousness that needs to end. When we elect royal-wannabes to the court and we get a bunch of jesters. Nowhere is that more certain than in the case of the heir apparent to the king and queen. Public service is a noble and humble calling, but sadly humility is lacking in the pretentiousness that permeates WeHo politics, including on boards and commissions. We need more people with heart who will do the people’s business first. Holding office is indeed “a… Read more »

Couldn’t agree more. Additionally the AKA project was a textbook failure on several levels. Imprecise, inadequate and inexperience at the planning department level bottom to top, a convoluted issue that was difficult to unravel at Planning Commission and a City Council that had even less insight. Easy to connect the dots. I once asked an outstanding former federal prosecutor I was planning to retain on a complex fraud issue, how he achieved such a high degree of success with so many varied cases. He relied, its easy when you simply connect the dots. Whatever their business or monkey business, they… Read more »