West Hollywood’s City Manager Paul Arevalo has announced his retirement at the end of June 2021.

I’m glad to know our City Manager Paul Arevalo. He is a great guy. Our city has benefited from his leadership. Paul has been working with the City of West Hollywood since 1990. He started as the Director of Finance and became interim City Manager in 1999 and shortly thereafter was offered the full time position as West Hollywood’s City Manager. Paul’s leadership and understanding of finance helped to build this city. Paul’s vision and the vision he shared with then Council member John Heilman created an infrastructure that threw off revenues to support incredible social services, more affordable housing units per capita then any of our neighbors, and highlighted our commitment to our core values. He also is one of the highest paid city managers in the state with a monthly salary of $31,379.43 plus other benefits.

Oscar Delgado is the Assistant City Manager and oversees 3 departments. Facilities and Recreation Services, Planning and Development Services, and Public Works. Oscar has served the city for over 20 years working his way up the ladder.

Yvonne Quarker is the City of West Hollywood’s Acting Director of Administrative Services. She has worked for the City of West Hollywood for 18 years. Prior to accepting this new role, Yvonne served as City Clerk for 6 years, Assistant City Clerk for nearly 3 years, and has held positions in the City’s Rent Stabilization and Housing Division, and its Legal Services Division. While Yvonne might be considered a long shot to many she may have an edge among the majority female city council members.

Who will be West Hollywood’s next quarterback? Are we going to plow forward with Arevalo type independent thinking? Or will bureaucrats take over? There is a leadership vacuum in our city with the loss of John Heilman’s stewardship, the City Manager Paul Arevalo, the City Attorney Mike Jenkins and the pro-business former Councilmember John Duran. What do you think?

While I understand that this discussion is at this point about only selecting an interim manager, I will say that my experiences with Ms. Quarker have always been responsive, respective and expedient. All these traits are in short supply in an often imperious culture at city hall, which culture I might add starts with much of the council. I’m convinced that Ms. Quarker has the personality, temperament and sense of service to deliver a better resident-centric delivery of services at city hall.

Same experiences here. She would make an outstanding city manager for however long Wehoians would be lucky enough to have her. Non-narcissistic, honest, sharp as a tack.

One of the requirements should be that the new City Manager live IN WEST HOLLYWOOD. Is that too much to ask? Paul Arevalo goes home to Pasadena every day, where the schools are better, right? Maybe it’s safer there too? Better for a family? I think it is best to have someone running the City that lives in the City.

MisTBlu
Reply to  Todd B.

I’m with you. There are certain jobs where being a resident of the city in which you work should be a basic requirement.

LOL. Don’t let the door hit ya Paulie. What is Arevalo’s pension pay-out? He seemed to have spent more time at Soho House greasing his palms than in his office. Not to mention his assoc with The Rose Bowl financial debacle… Paulie, Paulie Paulie. Time for a pasture. Good riddance! WeHo needs to stop and think about the development deals being made and the payoffs associated with such deals. For a town of 15,000 people, there sure is a lot of unaccountable grift going on. Arevalo’s mission to homogenize the neighborhood by pushing tenants to the east while cozying closer… Read more » 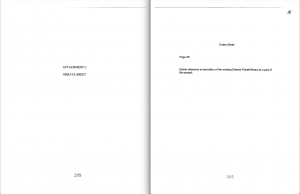 Exactly who is selecting the next City Manager would be a fair question. Would it be the Human Resources Manager Susan Schumacher with the city for 27 years? Once attempted to find out the parameters for the Urban Designer/Architect and the chain of command to obtain this information was impenetrable. The best was that the city had hired an executive search team. Ok, so what is the HR Manager qualified to do at $279,000. per year with perks. What sensibilities would a person have whose nearly entire professional life has been within the silo of West Hollywood? Is it $279,000.for… Read more »

Well, corporate (at least) history has shown, the true role of HR is to protect the ring of cronies at the top. That’s the only “expertise” required of HR… that their ethical standards be at the same base level as their bosses. Covering up misdeeds and misbehavior is job #1 since the public would lose their minds if they knew what was really happening behind the scenes at the company they own stock in (or are paying taxes for, in government’s case). Having an inappropriate relationship with a subordinate, for instance? Participating in or condoning or ignoring criminal acts? You’ve… Read more »

The City Council selects the City Manager. The HR manager has no role in the selection process, other than handling any associated paperwork to complete the hiring process.

Do you believe the city council members are each doing independent executive searches? Who do you believe compiles the collection of applicants or those solicited? Do you actually know or are you speculating?

Another vote for Yvonne changing the culture at City Hall here.

I think Yvonne is the best choice here and could bring a new perspective to the role. Hoping for independent thinking and a shift in the good ol’ boy WEHO behavior.

Many at the top eschelon of some cities have had their promoted positions handed to them on a silver platter because they do the king’s bidding without question and the king rewards them (the accompanying pension bumps are no joke either). Would not surprise me a bit if this is what happens again here. Hope you’re right, though. It would take guts on the part of city council to toss out the fat cat status quo.

Do we hear a nomination for Steve Martin?

He has many of the attributes and a fairly thorough understanding of the mechanics of the city, balanced ideas and is open…plus he has experience. And yes he lost several recent campaigns for CC but did not grouse about it. So let’s not hear from the “grousers” in the community about this idea.

That is very kind but way above my qualifications. Knowing what you don’t know has always been important part of how I get on in life. There is a huge potential array of professional candidates to run this incredible City if the Council would open the process to a national search.

The comments on Wehoville fawning over the current guys who run the city are laughable. You DO understand that you are only seeing what they want you to see (about the city, about them as people, etc) don’t you? Yvonne Quarker would be the best thing that could happen to WeHo. She gets it.

Over the years the most responsive city employee I have known is Oscar Delgado. He always kept an even keel and was willing to step outside his official role to work with residents. Should we residents have a vote for City Manager?