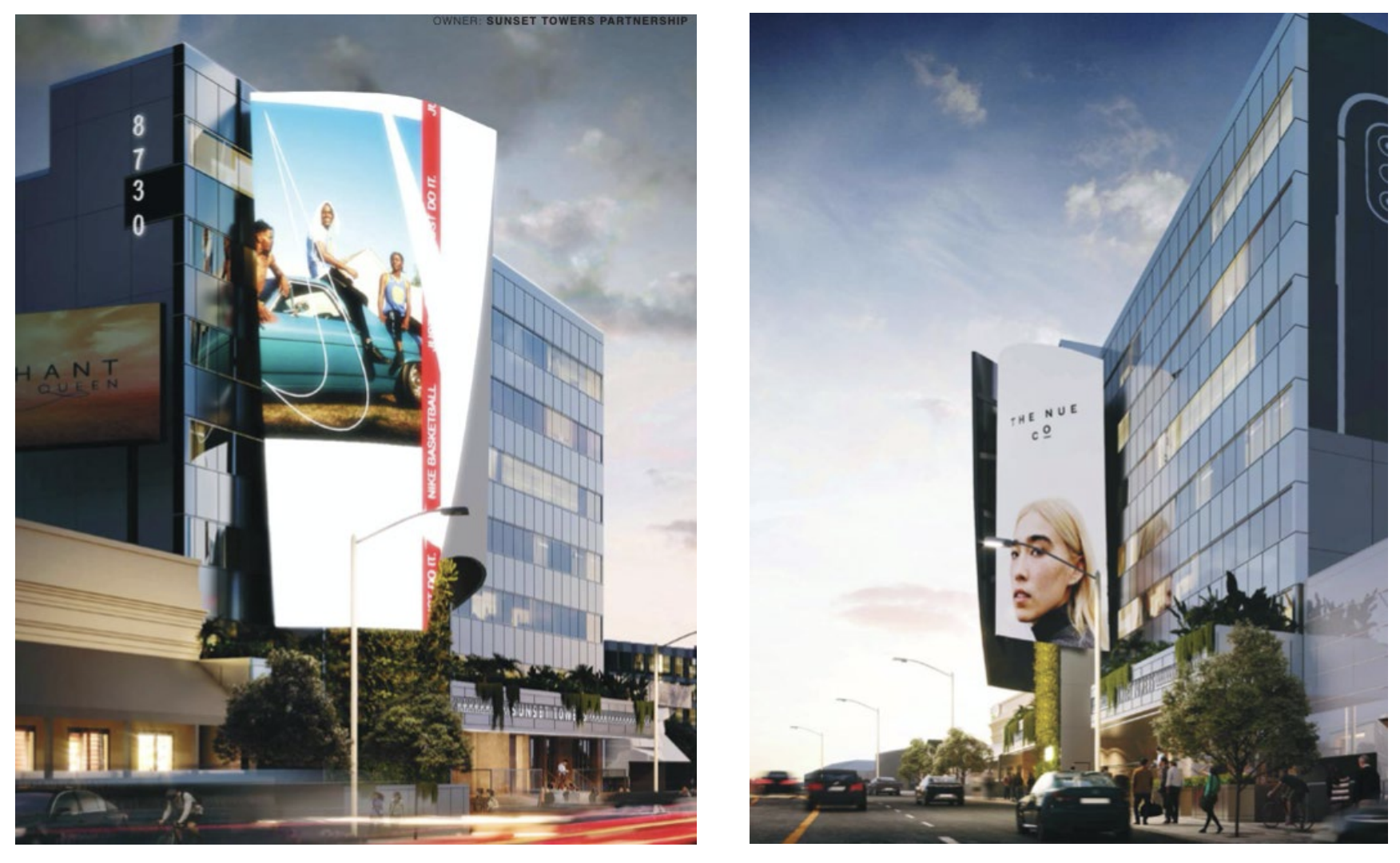 the character of the Sunset Strip.

The conjoined twin billboards hoisted high on the Sunset Towers will breach tradition in every way.

Instead of lying flat against the building, they’ll jut out into the air like a giant pair of window shutters. Instead of flat images, they will display a hybrid of static visuals and vivid motion graphics.

It’s just the latest leap forward in the rapid evolution of outdoor advertising on the Sunset Strip — too rapid, some might say.

The Historic Planning Commission was impressed with the presentation city staff gave on the project Monday night.

They couldn’t find any reason to flag the proposed billboards — known as the “Sunset Worl,” as in “whorl” or spiral — or the accompanying remodel of the Sunset Towers at 8730 Sunset Boulevard, which will reclad the building’s northern façade in lightweight brushed aluminum composite panels and install a significant amount of landscaping along the front façade at the pedestrian level and within planters above the existing ground floor canopy.

What weighed on their minds was the bigger picture — even though it was outside of their purview.

“That is the first billboard that the city has allowed to be extended out to the curb. Every billboard is going to come out and use these precedents to say, ‘We deserve to be all the way out to the curb.’ At that point, there is going to be no view down Sunset at any point, that will see anything other than billboards. We are dramatically changing the landscape of Sunset Boulevard.”

The agenda item did not call on them to vote for or against the proposal, and they do not wield the power of the Planning Commission. They recognized their limited ability to address the looming issues.

“I think that Planning Commission, and particularly City Council, needs to think about this very carefully, in terms of what they approve in terms of billboards encroaching into the public right of way,” Levin said.

“It doesn’t appear to impact the historical resources,” said Commissioner Jacob Sotsky. “But this is one of the most dangerous stretches along Sunset Boulevard. And I do wonder if planning is going to take into consideration the fact that when you add dynamic billboards into this space.”

“The reason why these businesses are willing to pay such high dollar value to be on this stretch,” said Commissioner Lola Davidson, “is the very thing that we’re trying to protect it. And if we don’t somehow stop it, (Sunset Blvd.) is going to turn into Times Square, and that will take away what we love so much and why that property is so valuable to these advertisers.”

The take away is that Staff is setting policy and decisions continue to be made behind closed doors that impact the future of the City. At some point the Planning Commission just needs to say “no” and have a study session as to where we are going with digital signage.

Take a listen to Frances Anderton of KCRW interviewing John D’Amico and Bianca Siegle, Weho Planning 2007 to 2020, most recently Director of Long Range Planning, as to the genesis of the Sunset Digital Billboard “Experience” a term favored by John D’Amico. D’Amico prefers to not use the word “digital” because he believes in the “cultural experience” albeit an experience of capitalism. Bianca Siegle left the city in 2020 for the LA Planning Department and now is Assist. Director for Citywide Policy in Bellevue, Washington a city with a population of 122,363.

Yup. They will dramatically change the character of the Sunset Strip.

The state of Hawaii acted to prohibit billboards decades ago, The state is still there and a major tourist attraction despite the lack of outdoor advertising. The natural beauty of that state shines through without the garish, blazing of neon lights to the curb. Several north-eastern states have followed suit – no billboards! If billboards can be controlled on Santa Monica Boulevard within WeHo, they can certainly be controlled along Sunset Boulevard to the relief of the beleaguered residents of that area.

There is no "there" there
Reply to  A. Lee WALKUP

12 miles of Hilton Head Island was built in harmony with nature with no buildings higher than the trees and no billboards. It offers many ingredients for a perfect vacation getaway and/or a harmonious place to live. There is a definite “there” there. Unfortunately the recent foresight of the city envisions endless cash registers for them and the mantle of philanthropy to the owners of buildings designated as cultural resources whose owners never found the time to treat them as such when the last cash windfall rolled in. With the exception of the owners of Sunset Plaza who has resisted… Read more »

If it’s not stopped Sunset will be more than Times Square, it will be “Blade Runner” without the rain.

Fuzzy memory prevents actual date from being recalled but, perhaps twenty some years ago the the National Trust For Historic Places designated Sunset Boulevard as one of America’s ugliest streets. I do also recall doing a ;ice for WEHONews about that. The Strip has had its glory both faded and brightened with time. So what if it becomes our Ginza? WEHOI needs bling to encourage and delight visitors. Billboards or unusual architecture are in its future.