Publishers Note: WEHOville is proud to welcome syndicated columnist Tony Rizzo to our family of resident contributors. Tony is the former Editor of Soap Set Magazine, and former West Coast editor of Soap Opera Digest. He currently writes weekly columns for the Hearst syndicate and is a resident of West Hollywood for over 40 years.

In 1941 Warner Brothers Studios signed a relatively unknown actor named Harry Lewis to a long term contract which led to a role in “Key Largo” with Humphrey Bogart, among many other films.

He and his wife Marilyn (Friedman), who designed fashions for movie stars and films under the name Cardinali, (particularly famously for Marlo Thomas and her “That Girl” series), had a dream to open a restaurant. In 1950 they invested their life savings of $3,500 to open a burger joint on the corner of Hilldale and Sunset. Harry wanted it to be a place actors could hang out, and knowing every actor’s dream is to play Hamlet…he named it Hamburger Hamlet.

Before he could say “To be or not to be” his “Hamlet” spread to 23 more locations in Los Angeles and the San Fernando Valley.  Across Hilldale was the office of super agent, Beverly Hecht, who frequented “The Hamlet” across the street and before long was handling Harry Lewis as an actor.  Among his most memorable roles was one in the epic Cecil B. DeMille extravaganza, “The Ten Commandments,” in 1956.  But his greatest success was his little hamburger hangout.

In 1969 The Hamburger Hamlet went public and was thriving. Harry required all would-be waiters and staff to pass a 3 to 6 week schooling, (actually on La Peer and Burton Way), before becoming a Hamlet employee.  There was a certain element of “The Harmonia Gardens” (in “Hello Dolly”) that made the staff go the extra mile to make people feel at home.

In the ‘90’s I personally “hung out” there on many Sundays and sitting in a nearby booth, was always treated to the vision of the fabulous Ester Williams who joined friends after they’d all been to church. Then there were the many nights Oscar winner Shirley Jones ate dinner there with her gang which included stepson David Cassidy, (at the height of their “Partridge Family” success) Shaun Cassidy, (then starring in “The Hardy Boys”), as well as Patrick and Ryan Cassidy.

But the most frequent actor/singer to “hang” at The Hamlet was Dean Martin, who lived on Mountain and Sunset.  People were very respectful of his privacy, especially when he lost his son Dean Martin, Jr. (Dino), in a plane crash. After he split from his long time wife, Jeanne, in 1969, he ate at The Hamlet most nights.  Once while I was walking by I saw him about to drive out of The Hamlet parking lot and snapped a picture of him.  Other times I sat at the next table from Al Pacino, brunching with his daughter, interviewed Tab Hunter for a magazine and frequently dined with Jeanne Cooper, (of “The Young & The Restless” fame), her son Corbin Bernsen, (of “L.A. Law”), with his brother Collin and sister Karen.

Sadly, time being what it is, The Hamburger Hamlets began closing, one by one. It was a sad day when the Sunset/Doheny Road Hamlet closed.  I often visited the last Hamburger Hamlet on Van Nuys Blvd., off Ventura Blvd.  I thought they were going to make it work and they were even planning to open another one on the West Hollywood side of the hill, but they got into hot water after serving a minor liquor and were forced to close.

True to his vision, actors such as Dean Martin, singers such as Peggy Lee and legendary directors like Alfred Hitchcock became regulars.  It was not surprising to enter The Tap Room and see Bette Davis chain smoking or Frank Sinatra meeting with his publicist. Janet Leigh and Tony Curtis, Sammy Davis, Jr., Debbie Reynolds, Lana Turner, Peter Falk and Rosemary Clooney all “hung” there. Once it was reported Lucille Ball was seen in the ladies room spraying her red hair.  Immortal agent Swifty Lazar, who among his clients counted Cary Grant, Cher, Gene Kelly, Humphrey Bogart and even Madonna to name just a few, had a booth reserved just for him at all times, which even had a golden plaque proclaiming it “his” booth. In 1987 Harry and Marilyn Lewis sold their little hamburger joint to Koo Koo Roo for $29.2 million and opened “The Hamlet Garden” in Westwood and Kate Mantilini (on Wilshire Blvd. and Doheny), but that’s another story.

The Hamlet continued to be the place for people to hang.  But without Harry, Koo Koo Roo knew they needed something to replace his presence. Enter the former cover model and actress Francis Davis, former wife of jazz legend Miles Davis.  She was one of the original cast of Broadway’s “West Side Story.”  If you look on the original cast album you won’t find Frances Davis but you will find Elizabeth Taylor, which was her real name until she moved to Hollywood and found it was already being used.  It was no surprise to see Francis burst into song in the entry room with one of her BBFs Diahann Carroll as her other BFF Connie Stevens joined in.

Harry Lewis joined that great Shakespearean company in the sky in June of 2013 but his vision of a place for actors to hang out remains vivid and alive in those of us who remember it and loved it!

I wrote Harry and Marily Lewis a letter a few years ago about my experience working at the Woodland Hills store in 1968 when I was 16. Marilyn responded to me that Harry had loved the letter and was walking around their Century City apartment saying “that’s my legacy”? What did he mean? I wrote about how my bus boy job became more, by the Hamlet’s practices and standards. In particular, Mr. Lewis personally visited, engendering some fear and activity as word passed from store to store which location he was headed toward. He called me over once when I… Read more »

I have fond memories of the Hamburger Hamlet in Westwood, and few other Los Angeles area locations, when I attended UCLA, a long time ago. After I graduated UCLA, I visited Hamlets in Washington, DC, Palm Springs, Pasadena, and Los Angeles locations. They closed, one by one. Are any locations still open? I see people are still talking about it, decades after is glory days faded.

The last location was in Van Nuys but alas it is gone too. Thanks for your reply.

I was the daytime bartender at the Hamlet on Doheny during the 90’s. Although the corporation that owned it at the time were not family focused, but instead ‘Number focused’, the restaurant was still a family hangout for old time Hollywood and their kin. And Francis Taylor was the main reason so many of them kept coming in. I loved her. We were neighbors and friends back then and I miss her. Since you mentioned Dean Martin, I’ll tell one story of him. He was a creature of habit, coming in every Sunday and always sat at the same table… Read more »

Sorry, an amendment. Dean Martin always wanted the same WAITER. He sat at a table. Sorry. I typed faster than I edited 🙂

I grew up with HH, first the South Lake Avenue/Pasadena branch, with its loooong hallway to the hostess desk, the dark but cozy bar with the central fireplace back when it rained here, and the little diorama depicting Hamlet beseeching the Gods, or someone, in a little glass wall mount. The best shakes, ever, anywhere, and the chefs and line cooks with their toques at the grill, clearly visible to all. And those steak fries! Man, that place was it. Later Westwood and Brentwood and finally the ultimate experience of many, many meals at the Sunset/Doheny branch, hostesses by the… Read more »

A good story about my mom and dad but not altogether accurate. The Hamlets were not purchased by Koo Koo Roo. We were competing bidders on the purchase of the Sunset Hamlet sometime around 2000. That’s the only connection we had with them. Hamlets we’re sold in 1987 to a private New York company. I think their name was Wetherly, if memory serves. The Gardens did not come about as a result of the sale. It arrived on the scene in 1985 and was sold with rest of the chain. Then we bought it back in ‘95 and operated it… Read more »

Kate Mantilini would have stood the test of time, The notable design by Thom Mayne and Michael Rotundi of Morphosis also of 72 Market Street in Venice, the food great and the atmosphere civilized……just the right mix. Ahead of its time and missed. We could use another or a re- incarnation of it.

Thank you, Adam, for setting the record straight. i did sort of become curious when I read KooKoo Roo. As a former Hamlet employee (1990-2000) they were never my employer 🙂

Thank you for remembering Hamburger Hamlet! I worked for Marilyn and Harry from 1980 to 1987, and I have many wonderful memories and stories!
(I still have a few of the recipes too!)

Good little article about a place that was not pretentious like some places were on the Sunset Strip.After reading this,I felt like I missed something unique.Now when you go to some places,you go to be seen and see.

Had dinner there and on Highland with record industry folks many times in the ’70s. Basically highly overpriced burgers, but the Freidmans’ places had a certain cachet and excellent service. Too genteel for today’s tastes. Now they hang out at Katsuya for overpriced sushi. Great DJ there, though.

Once I went to HH with a friend and a glamourous old lady with her elderly entourage came in. You could just tell she had star quality. We finally figured out it was MITZI GAYNOR!

Mitzi was a reg. So was Betty White.

The chain closed at least a decade or more. Time to drop the tears & find a new favorite local restaurant.

I still miss kiddy-land before the Beverly Center, despite the photo retrospective that showed my childhood memories were of a dirty gross place. And those poor horses tied up and walking in a circle their whole lived. But as kid, “I loved riding the horsies”

I must admit to the loss of not being at Hamburger Hamlet and especially not having met Frances Taylor Davis 😢 but, we do have Fatburger ❗ The Fatburger restaurants were founded by African-American Woman and Civil Rights Activist Lovie Yancey from Exposition Park Los Angeles. Currently they serve one of the best tasting plant based protein burger around know as the impossible burger. Now this is a real good fit for West Hollywood.

Comparing Fatburger with Hamburget Hamlet is a bit like comparjng a Yugo with a Benz 600.

Given the Impossible Burger being served at Fatburger an environmentally friendly plant based protein that tastes as good as beef, comparing Fatburger to Hamburger Hamlet would be more like comparing a Tesla to an old Benz 600❗🚀 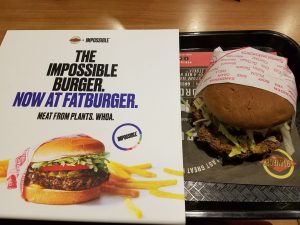