West Hollywood is about to take the war on traditional plasticware to a whole new level.

City Council will vote Monday night on a proposal by Councilmembers Sepi Shyne and John Erickson that would ban all providers of prepared food and beverages from giving away plastic straws, utensils, containers, lids, cups, and any other single-use dinnerware items that aren’t marine biodegradable.

That includes dine-in, take-out and delivery.

State law already says restaurants and other food establishments can’t give out plastic straws unless the customer requests them, and a new bill headed for the governor’s desk will make it so for all other single-use condiments and food serviceware.

The West Hollywood ordinance goes a step further in forbidding them from being given out entirely — even if the customer requests them.

So how will WeHo roll out this brave new world?

That’s up for city staffers to figure out.

The item, 2.O. on Monday’s agenda, gives staff 60 days to come up with ideas; the item’s authors suggest a six-month grace period to allow food providers to finish giving out the single-use plasticware they have in stock, as well as a public information campaign to assist businesses and the public in the transition. They also envision a list of compliant products to be published on the city’s website.

West Hollywood made waves in 1990 when it banned polystyrene (Styrofoam) packaging, and was also one of the first cities to ban single-use plastic bags.

The production of marine biodegradable plastics is a quickly evolving field in chemical engineering and a booming business for manufacturers.

All plastics eventually decompose. Depending on factors like exposure to sunlight, traditional plastic items can take up to 500 years to break down.

The general public lacks a clear understanding of what “biodegradable” actually means, and terms like “bioplastics” and “ocean-safe” are often used synonymously by marketers to describe products that don’t meet the true standard. Companies that manufacture biodegradables are also facing growing accusations of  “greenwashing” — overstating the environmental benefits of their products. California has enacted strict regulations against greenwashing and has been aggressive in enforcing them. In 2018, the state received a $1.5 million settlement against Amazing for deceptive claims of biodegradability.

In their agenda item, Shyne and Erickson point to Santa Monica as an example of cities that have successfully moved to ban single-use plastics. The city publishes a list of vendors where restaurants and other food providers can purchase approved products; it also provides a number of posters and flyers to help explain what is and isn’t allowed, as seen below.

YES, plastic straws have a serious Environmental impact and, should be banned❗ Especially because there are alternatives ready like LOLIWARE’s LOLISTRAWS, which they call the “world’s first edible, hyper-compostable, marine-degradable straw aimed at replacing plastic straws.” An alternative to plastic straws that can be composted, eaten, and even add flavor to your drink. Made from seaweed-based material which is totally biodegradable, marine-degradable, and non-GMO. It even looks like plastic and, works just as well. 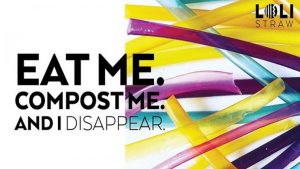 Empty gestures that hurt businesses and accomplish nothing.

Just checked on pricing at some of the vendors listed by Santa Monica, it will average 350% increase in costs for restaurants. I also like that Santa Monica lists aluminum trays as banned, these are 100% recyclable!! So now for small restaurants, who have already been hit badly, are being hit with more regulations, and will probably have to face extra costs. I would also like to see a report of how many small restaurants closed due to banning plastic ware and being faced with huge increases in costs. Production of the items mentioned are low so costs will remain… Read more »

Residents don’t feel safe walking the streets, our sidewalks are filthy, are trash cans overflow, vomit splatters against buildings, alcoholics and drug addicts and the mentally ill line our doorways and parks and they’re worried about plastic straws.. we have ourselves some great leaders 🙄

There are new paper straws that last a lot longer than the old type. I support using as little plastic as possible. This is a great beginning. At this stage I filter my own water and use glass or stainless bottles. At about 5 bottles a day I ma not using about 1500 a year. I also use laundry dtergent sheets, not liquid or pods in plastic bottles/containers. Little things mean a lot.

Meanwhile, I cannot walk on Larrabee without stepping in the irresponsiblity of dog owners.

Isn’t it just like Erickson and Shyne to propose an ordinance and request a council vote before the citizens of West Hollywood have ever heard of the potential ordinance or may respond to the proposed ordinance. Today is Sunday, tomorrow is the council vote. The information certainly didn’t come from the city- this is called Blindsiding. After the council has disenfranchised the hotel industry, now they are going after the food and beverage industry. I’m a very liberal democrat and believe wholehearted in environmental protections. But to enact ordinances without research, economic impact study, nor a plan on how to… Read more »

You raise a good point about enforcement, which begets the framework of ongoing compliance. We comply, for now – but what’s the tipping point? The city does not enforce the many rules and regulations, laws, zoning, which would otherwise protect the quality of life for the public. It cant or wont, and the end result is an increasingly, albeit indirectly taxed society who have to bare the increased costs of these woke and virtue signaling policies. Paying for cleaning up after the homeless foul their private businesses, or drive away consumers, or hardening their infrastructure, hiring security etc – the… Read more »

Number Uno: Let’s have the city enact a mandate of cleaning the sidewalks, everywhere stat. Stat, schnell, immediately. Secondly: Mandate that scooter companies install mechanisms on their dangerous toys making them allergic to sidewalks or mandate them “not able to conduct business” until that happens. Lastly we see how ineffective the city has been enforcing a simple ordinance of banning the gas powered leaf blowers. Some neighborhoods have to employ their own ingenuity for setting up a can’t miss strategy for code enforcement to catch and effectively cite the offenders. WHWRA has also done this. The residents should mandate “no… Read more »

T-shirt = slob since when?

Since they took office. Pay attention.

I think you should care less about what people wear.

Plastic surgery should go too. Especially the tragic ones.

This is phenomenal. I already use re-usable metal straws.

You only use plastic silverware at home? Yikes