The Public Safety Commission wrestled with several fundamental security issues facing WeHo on Monday night, attempting to address them with urgency while grappling with their sheer scope.

The debate began during public comment, when Bill Karpiak spoke up to ask for a security kiosk at the Ramada Plaza.

“We’ve seen a dramatic increase in crime and homeless in our location and along Santa Monica Boulevard, and I know you’re very familiar with how it is affecting residents, visitors and local businesses,” he said. “People living on the street can be very aggressive these days and I’ve received numerous complaints from our tenants from some of our hotel customers as well as retail guests as well.”

He was deeply concerned about how the situation is affecting international travelers, whose No. 1 concern is security, he said, and who contribute 50 percent of the revenue generated by West Hollywood hotels.“It’s just our hope that we can provide the safest destination possible.”

The commissioners agreed that a demonstrable increase in crime warranted the establishment of a kiosk on the city’s West Side — but other parts of town were in need of them, too. The debate splintered on where it was needed most urgently.

“I’m not saying that we don’t need (a kiosk) by the Ramada,” said Commissioner Tod Hallman, but “it should start emphatically on the east side.”

Commissioner Danny Roman was unconvinced the kiosks would do any good.

“I mean, we were burglarized on Monday morning,” he said. “Somebody broke through the front end and stole $10,000 worth of bikes. The cops come, they fill out a report, and everybody goes back to work. I send crazy emails to Council, and no one even responds. And we just keep going.”

“Putting the kiosk at Ramada — It’s not going to do shit.”

The commissioners agreed that the problem was greater than whether or where to place a kiosk. Greater presence by law enforcement and Block by Block ambassadors was needed overall.

“Unfortunately, I hate to say it, but we have to do it all,” said Commissioner Nika Soon-Shiang. “And I think that we need to put together a response that addresses what people have come to expect from this commission and asked us for.”

The commission approved a motion to call a special meeting to continue the discussion.

A kiosk is window dressing. I agree with those who think the Sheriff’s should be walking the beat, and biking around our City. All they do now is drive around, not interacting with the community and getting to know locals and business owners. They also are notoriously anti-bike. I can’t tell you the number of times a police car has parked right in the bike lane making me have to veer into dangerous traffic. I even had one of them yell at me to get out of their ay because they wanted to drive into the bike lane where I… Read more »

I carry a knife now whenever I go out – grocery, restaurants, bars – and intend to use it on any criminally insane homeless attacker that fux with me instead of wasting my time with a nonsense kiosk that alerts the police to come and do absolutely nothing. Take matters into your own hands if you can.

Zoomers think that you can get ANYTHING from a “kiosk.” Even protection from crime!

WeHo will collapse in a heap in the next 10 years. People just aren’t having it anymore.

Go away, you moved to the desert, so deal with the issues out there. Your doom and gloom is really tired. Weho will not collapse, that is absurd.

We need sheriffs walking the beat. We don’t need kiosks. I was raised in NY and we always saw officers walking the neighborhood. They knew the community and they were able to answer any issues immediately. The sheriffs in WH are not even visible. Never see them.

I agree. We’ve been asking for sheriffs to walk the bear for 8 years now. And they won’t and there’s is no over site. They do what they want, when they want.

That was Bill Bratton’s community policing initiative. Worked on NYC, didn’t work for him in LA. Onr city is vertical, one is horizontal. WeHo’s small enough to where it may well work. It’ll also kill the nightlife, which us why the Ramada’s even there.

You never see cops in West Hollywood unless they’re starting a shift or finishing. Where are they hiding? It’s so unsafe here now. The homeless are ruining Weho. When they do show up they say what do you want me to do? Do something. Do your job and get rid of the attitude.

The recent interviews, with all respect to the neatly pressed and personable deputies stating their corporate protocol, seem to lack the will of engagement to simply walk the community. Ear, Eyes & Feet, which were Bratton’s strategy which may well work in Weho. Getting too caught up in these other long range strategies, while they make work to some extent, do not give evidence to the residents that the deputies are present, aware, alert and ready to take action. This was originally the task of the COPPS team which seems to now be buried under boilerplate. The residents in Weho… Read more »

Not sure a kiosk is the answer.

There is an item on Monday’s City Council agenda on the kiosk issue but Council member Erickson is also promising more law enforcement presence at La Brea and Santa Monica, which is appreciated. The City just needs to deploy Sheriff’s foot or bike patrols at that intersection as the uniformed presence will have a positive impact. I just think the kiosk is a gimmick and a waste of tax payer dollars. But send in a public comment for Monday’s Council meeting if you want to be heard.

The now is NOW for action and results.

A month ago, a transient man stood on on the sidewalk when I was walking eastbound on Sunset Blvd and attempted to block my path but more alarmingly, he then attempted to punch me in the face. I was stunned and shocked! I tried to call sherrifs who didn’t see it as an emergency because I Evaded being punched. I asked on the phone the dispatch deputy what if someone who was a transient attempted to punch deputies but didn’t make contact they would still be arrested for attempted assault on an officer! I called twice insisting he would get… Read more »

In the mean while, you might consider avoiding trouble and problematic people. Put up your own antennae and walk across the street. Getting into fisticuffs with the Sheriff because of disagreements over their protocol is useless. Crying wolf repeatedly will get you nowhere. Take personal responsibility. Wehoville is not the Complaint Department. If you have a positive, constructive solution to offer take it directly to the person that can implement it. Best of luck.

Avoiding trouble is smart not dumb.

Fire every one of them and start over. Worthless!

Smile! You're On Camera

I rather see the city spend public safety funds on a security cameras like the ones in Beverly Hills instead of useless ambassadors to sit behind a kiosk.

WEHO Resident
Reply to  Smile! You're On Camera 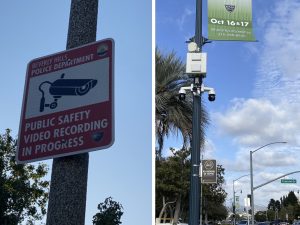 Stevie
Reply to  Smile! You're On Camera

Liberal city wanting Big Brother around,? Yea, um no way. Besides one of the Council members (current or former) might be caught on their knees somewhere.

Law abiding citizens should have nothing to fear with having eyes on the street. You’re in public and whether it’s somebody standing next to you watching you or the police watching from a camera it’s no different. The only difference is that when a crime is committed there is evidence and that evidence might lead to the conviction of the person that committed a crime. This would intern hopefully deter other people from committing more crimes. It’s a deterrent to people that might want to do something bad knowing that someone is always watching. Kind of like children. Beverly Hills… Read more »

I agree, no reason not to have cameras in today’s environment considering if a city’s camera won’t get you someone’s cell phone will.

My one foray out onto Santa Monica Blvd dining on the sidewalk resulted in not one but two incidents with homeless people. Fortunately, neither I not my friend were the target, but it was still annoying, and to be frank, not particularly appetizing, either. It’s obviously worse now that so much activity on the strip is outdoors on the sidewalks where they typically travel. There have always been homeless people on SMB but now that people are using the sidewalks more there are more opportunities for contact. More to the point, what the frig is a “public safety kiosk?” A… Read more »

You can find the security ambassadors every night having a grand ol time just chatting and laughing away their shift for hours with the evening staff at Sunset Strip Liqour instead of, ya know… Patrolling…

Kristin Cook and David Wilson needs to put an end to Block By Block. This photo of an ambassador drinking is unacceptable. 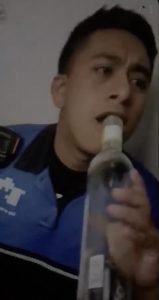 What a waste of Public Safety resources. I was at Starbucks this morning and witnessed an ambassadors and Starbucks employee groping each other. 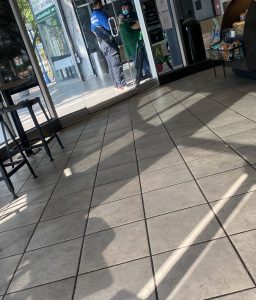 what does beverly hills do about the homeless problem???

The BH police drop off the homeless on the West Hollywood side of Doheny. This is not fiction. I live right there and have witnessed this many many times over the last 15 years.

This is not Manhattan
Reply to  :dpb

Seems like a lot of work on their part. No wonder they have to overcharge us for water service on the West side. (eye roll)