Crimes on WeHo’s West Side last month were up 96 percent over October 2020, Lt. Bill Moulder of the L.A. County Sheriff’s Department told the Public Safety Commission in his report Monday night. 62 percent of all Part One crimes committed last month originated on the West Side.

Moulder pointed to pickpocketers taking advantage of re-opened businesses and crowded streets. There were 39 instances of pickpocketing, 26 of which were felonies.

Targeted robberies are also an issue, he said.

“Yeah, in the last several months we’ve had some armed robberies, obviously, in the West Hollywood area,” Moulder said. “Our detectives and those of our neighboring cities, L.A., as well as Beverly Hills, have also been experiencing the same issues and have been working together on them.”

Commissioner Kerri Balbone requested information on the reported rapes that occurred in October.

In three of the rape reports, Moulder said, the victims knew the alleged perpetrator; one involved a conflict over the use of a condom. In another report, the victim claimed their drink was spiked, the latest in a rash of recent accusations. It’s part of a larger problem that Moulder said his department is working on currently.

Moulder had no updates regarding the homicide that occurred Oct. 28, when deputies responded to an apartment complex located in the 7300 block of Santa Monica Boulevard near Plummer Park and found a woman with gunshot wounds.

The victim was taken to a hospital where she later died of her wounds. This week she was identified as Kayla Hurst, 23, by the Los Angeles County Coroner’s office.

An investigation into the shooting was ongoing and anyone with information was asked to call the Sheriff’s Homicide Bureau at 323-890-5500. Anonymous tips can be called in to Crime Stoppers at 800-222-8477 or submitted online at lacrimestoppers.org.

Just a tip. You can easily lower risk of pickpockets by putting a large wide rubberband around your wallet.

I question if we pay so much for Sheriff’s policing protection, why is it unlike all other jobs where there is a HUGE failure to perform their paid job at a safe level.

I lived in WeHo for 30 years! This is what you get when you get a ONE PARTY city and STATE! Our constitution was not set up for this! It’s the reason it fails! Both parties are a disgrace to our country. This is not a TRIBE of parties where one party has the TRUTH. This is a woke joke! Shame on everyone for letting this happen to a beloved city and state.

Why blame the criminals??? They’re simply taking the opportunities handed to them by woke, white, bourgeois liberals who insist on mask mandates and lockdowns 20 months into this disaster.

According to your logic, there should be no crime in, say, Texas.

Looking at today’s West Hollywood, I can only think of that line Bette Davis made famous in her worst movie ever:

When I moved to Echo Park from the West Side 11 years ago, all of my WeHo friends and associates condescendingly tsk-tsked me and told me I would be sorry. Update: I am not. Not remotely. Not even a scintilla sorry. According to the LA Times, our crime here is less than 1/3 of WeHo’s.

Your Empire Has Already Fallen
Reply to  Graham

West Hollywood has been on a Water Slide To Hell for quite some time. When residents are more concerned with getting each others “pronouns!” right than paying attention to small concerns such as getting raped, murdered, or robbed…well, as always…you reap what you sew.

While residents were sleeping the city greased, grimed, and grit-ied into what it is today: uninhabitable. West Hollywood is like a wheezing painted lady whose makeup is starting to run from all the sweat.

Oh but what a shiny, shimmering, chic facade you have!

Graham
Reply to  Your Empire Has Already Fallen

Those They Zos are a Genius!

I know, put out a vaccine mandate that will keep murderers, criminals, and drug addicts out of West Hollywood. This is so brilliant even Lexi, Lindsey, and John Erikson could come up with it. “Let’s Go WEHOCC”

Could it be that history is repeating? West Hollywood has always been a candy box waiting to be dipped into by for thieves and thugs. However, we’ve had ups and downs in the amount of activity but always the same crimes – except for the current rage: pickpocketing, since so many people stuff their phones in their back pockets. Cops on foot and bikes used to make a difference. Why not now? (Rhetorical question?)

Well cops on bikes should NOT be a rhetorical question.
For years we had a very effective program. I are now seeing that we have reached the point of diminishing returns with our Security Ambassadors, both on foot and on bikes, and perhaps uniformed deputies would serve as a more effective deterrent.

Do you remember the trained and uniformed volunteer force we used to have? I remember my neighbor was a member for many years and I’m trying to remember the reason we did away with it.

The assignment in WH has long been considered a “country club assignment”. They require fancy SUV’s and have moved beyond foot and bike patrols. Our next big wave will likely be Cannabis Crimes outrunning compliance sponsored by West Hollywood City Council and Management. This isn’t Manhattan only 1.9 sq mile burgh Weho.

Unfortunately, our crime blotter only mentions the crimes where police reports were taken which means the statistics are actually much higher than these numbers in this article. When I ran for council last year my focus was on these crimes, which I coined the phrase the TAB crimes, Theft, Assault and Burglary. My focus was on making sure our Sheriff’s department was re-examined how we were spending our $20 million a year on their services in order to combat these crime statistics. Here’s my campaign flyer highlighting this: 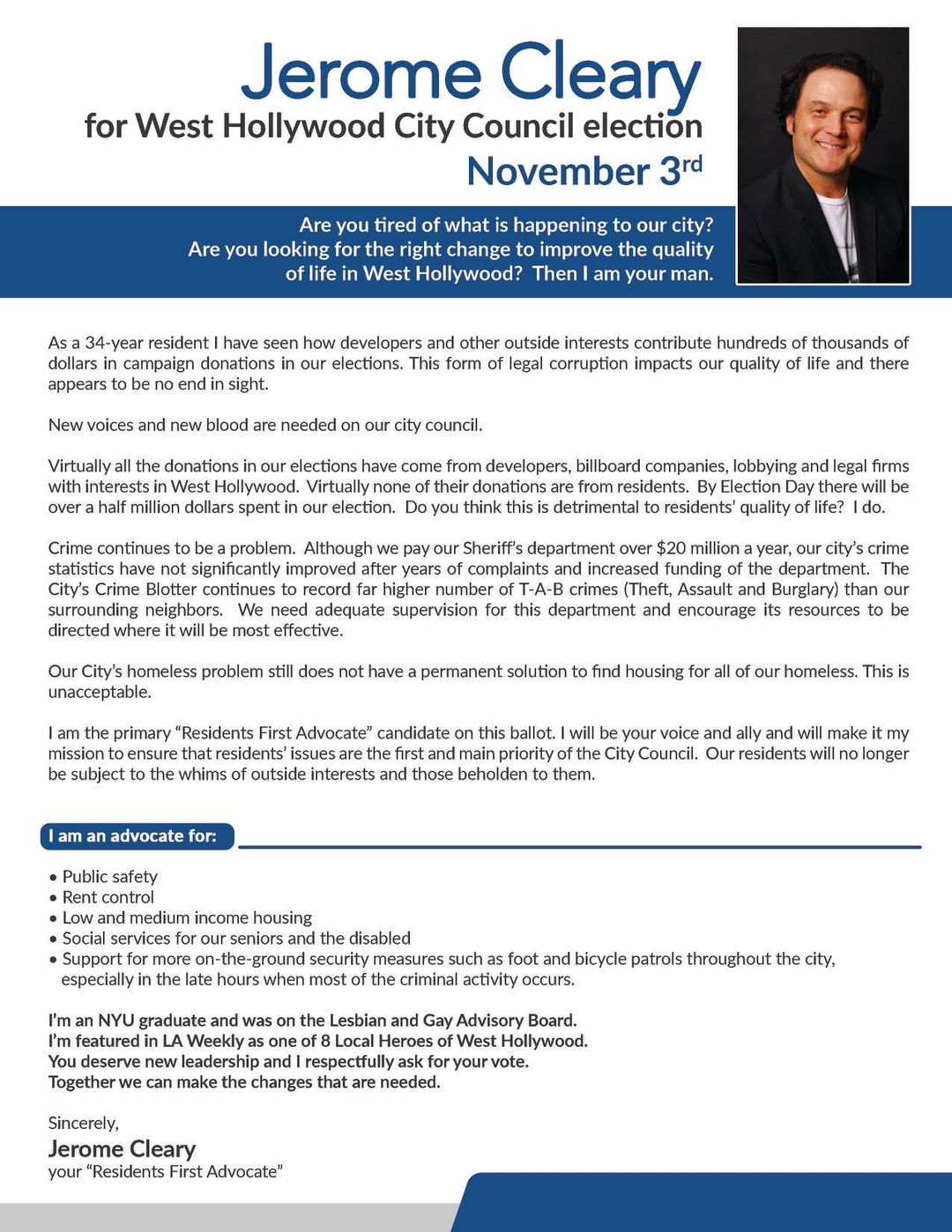 Check the Crime Blotter on the La Brea press each week form a wider view of the situation on the westside and WEHO.

I don’t mean to take away anything from the seriousness of the issue but it does seem to be an unfair comparison. In October 2020 we were in the middle of a pandemic when few places were open and traffic on Santa Monica Boulevard on Friday and Saturday night was as light as it is on Christmas Day. Perhaps it would be more of a comparison to look back at 2021 versus 2019 or 2018. In light of recent revelations in the LA times, I wonder how many of these statistics of increased crime are related to people being stopped… Read more »

One of the main issues is that West Hollywood encourages these conditions by their irresponsible policies and the PR approach that is favored by Public Safety Director Kristen Cook. She does not appear to be a serious problem solver but holds fast to her figurehead status. “How can we discourage crime when we want to attract tourists?” seems to be the policy. That seemingly filters down to the Sheriff policy as well.

For whatever my 2 cents are worth this is just another reason we NEED a sub-station on the Eastside as promised a couple years ago. It was a “done-deal” across the street from Plummer Park. The deputies and BBB need a facility they can walk into, use a restroom, write reports etc., not a Kiosk located at a busy intersection of Santa Monica LaBrea where parking is difficult unless you use the parking structure and will have to pay for if you are a resident and need to go and make a report. I outlined many other logical reasons in… Read more »