A former doctor from West Hollywood was found guilty this week of scamming tens of millions of dollars from health insurance companies and attempting to steal hundreds of millions more.

Jurors determined that Julian Omidi’s 1-800-GET-THIN business, famous for its once-ubiquitous billboard campaign, was a massive criminal scheme that lured in patients with promises of quick, easy weight-loss surgery. The company falsified test results showing that patients had obstructive sleep apnea and received about $41 million to perform those procedures. 1-800-GET-THIN submitted approximately $355 million in fraudulent claims, and billed patients $15,000 for each sleep study.

Omidi and his company were found guilty of 28 counts of wire fraud, three counts of mail fraud and one count of conspiracy to commit money laundering. He will be sentenced in April and faces 20 years for each of those counts.

“A jury found that Mr. Omidi committed a massive fraud against public and private health insurers by falsifying sleep studies and other patient information for authorized payments for Lap-Band surgeries,” said Ciaran McEvoy, spokesman for the U.S. Attorney’s Office in Los Angeles, in a statement. “Our office is grateful for the jury’s service during this lengthy and hard-fought trial and we will continue to vigorously prosecute health care fraud wherever and whenever we find it.”

In an attempt to get comments back on topic, the former doctor (spent a little time in West Hollywood) and his company (based in beverly hells) were found guilty of filing around $355 million in fraudulent claims with Tricare the military service healthcare and private healthcare providers. Basically falsifying test results to justify the procedure he sells! The harm done here extends far beyond the effected patients in that it undermines the public’s faith in Medical Science and Healthcare Professionals in general. This is very dangerous during our COVID-19 Pandemic ☣ because antivaxxers and outright quacks exploit instances of Medical… Read more »

Throw the book at’em! MAYBE it will deter at least one other person from doing the same?

Why are people going to all the trouble to get thin and look like me, when being overweight would make you fit in quite well as an LASD deputy ❓ There is also plenty of opportunity to gain considerable weight driving around in their luxury SUVs with hours spent on gluttonous lunch breaks. 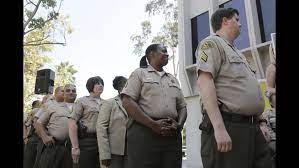 Yes but, I highly doubt the internet trolls are really residents of West Hollywood or I wouldn’t need hyperlinks and pictures to make my point of the LASD deputies and even Alex Villanueva (has a tight elastic waist band under his uniform in photo ops) being overweight ❗ 🤣

Prattle on
Reply to  Cy Husain

Cy Husain
Reply to  Prattle on

So lead by example❗

Perhaps a more appropriate spelling of your name would be Sigh

Maybe you just need to try to find a job for another frivolous lawsuit so you can eat and gain weight? Ah nope, you’d rather take free taxpayer dollars instead.

Did you just try to insult someone by implying they *aren’t* overweight?! LOL

Judges have the authority to sanction lawyers and fine plaintiffs who file frivolous lawsuits and, it’s a matter of public record that NONE of my legal filings have been determined to be frivolous by a Judge. NO I wouldn’t rather “take free taxpayer dollars” like fundamentalist preachers and defense contractors❗