Grammy Award-winning singer, rock star and actor Meat Loaf was being remembered for best-selling album “Bat Out of Hell,” his role in the “The Rocky Horror Picture Show,”  his kindness and charisma following his death at age 74.

The singer, who was born Marvin Lee Aday, died Thursday, according to a statement posted by his family on his official Facebook page.

“Our hearts are broken to announce that the incomparable Meat Loaf passed away tonight,” the statement said. “We know how much he meant to so many of you and we truly appreciate all of the love and support as we move through this time of grief in losing such an inspiring artist and beautiful man… From his heart to your souls — don’t ever stop rocking!”

No cause of death was released, but he had numerous health scares over the years. TMZ said the cause was complications from COVID-19.

“Had So Much Fun With Meatloaf When We Did  `Dead Ringer,’ ” Cher tweeted. “Am Very Sorry For His Family, Friends, & Fans. Am I imagining It, or Are Amazing Ppl In The Arts Dying every other Day??”

Singer Adam Lambert posted a photo of himself with Meat Loaf while noting his influence as a mentor and rock icon.

“A gentle-hearted powerhouse rockstar forever and ever,” Lambert wrote. “You were so kind. Your music will always be iconic. I’m sure you’re singing concerts in the great beyond. Rest In Peace sir. #MeatLoafRIP #Meatloaf.”

His friend, actor-writer-director Stephen Fry, referenced the Meat Loaf hit `Paradise by the Dashboard Light while recalling a time when the two performed together.

“I hope paradise is as you remember it from the dashboard life, Meat Loaf,” Fry tweeted. “Had a fun time performing a sketch with him on `Saturday Night Live’ way back in the last century — he had the quality of being simultaneously frightening and cuddly, which is rare and rather wonderful.”

Meat Loaf recorded several hit songs, including “Two Out of Three Ain’t Bad,” and “I’d Do Anything for Love (But I Won’t Do That).”

“Bat Out of Hell,” was released in 1977. After a slow start, it became a best-selling collaboration, with more than 40 millions sales, with songwriter Jim Steinman and producer Todd Rundgren and made Meat Loaf one of the most popular performers in rock.

“Bat Out of Hell” included the songs “You Took The Words Right Out of My Mouth,” the title track, and “Two Out of Three Ain’t Bad” and “Paradise By the Dashboard Light.”

As an actor, Meat Loaf appeared in the movie “Fight Club” and TV shows “Glee” and “South Park.”

In the 1970s, he played the biker Eddie in the theater and film versions of “The Rocky Horror Picture Show.”

Meat Loaf’s other albums included “Bat Out of Hell III: The Monster is Loose,” “Hell in a Handbasket” and “Braver Than We Are.”

Meat Loaf was raised in Dallas, Texas, and was the son of a school teacher who was a single mom. He attended Lubbock Christian College and what is now the University of North Texas.

He is survived by Deborah Gillespie, his wife since 2007, and by daughters Pearl and Amanda Aday.

Sweaty Teddy is next!

I love Meatloaf’s music. But what does this have to do with West Hollywood? Wehoville is not TMZ

He was in the original West coast cast of the Rocky Horror Picture Show, at the Roxy Theater in West Hollywood, in 1973. Presumably, as a Hollywood celebrity, he ate in our restaurants, and likely spread his Covid around to as many people as he possibly could in his short life. Please can rest a little easier without him infecting people in his path. He can no longer hurt people, so that’s a good thing. No fake sympathy, no fake shock from me. Risky dangerous behavior is a recipe for a short life.

I’m sorry, but this is a horrible statement – “Presumably, as a Hollywood celebrity, he ate in our restaurants, and likely spread his Covid around to as many people as he possibly could in his short life. Please can rest a little easier without him infecting people in his path. He can no longer hurt people, so that’s a good thing.”. He did not live around here and there is no proof he had Covid as of now.

I agree, he no longer has covid: because he’s dead. What’s worse: my horrible but truthful statement about a superspreader spreading diseases around, potentially killing untold numbers of people, OR the person telling you about it? 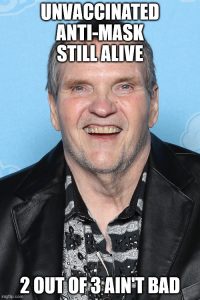 “there is no proof he had Covid as of now.”

He died from COVID

Uh – his life wasn’t that short.

The world is just a little safer without another anti-science anti-vaxxer anti-mask Covid positive Trump-loving lunatic intent on spreading their disease to as many people as possible. There are consequences for being dumb, one of them being a short life. Good riddance super-spreading dummy. He had no respect for the safety of other people, I have no respect for him. Bye, Felicia.

Tell us how you feel about AIDS patients who didn’t use a condom, addicts overdosing or obese people dying from cardiac arrest, too. I’m down for a chuckle.

Get ready for your chuckle: there are consequences for risky behavior and bad life choices. I suspect you have made quite a few. Thinking you are more clever than me is surely one of them.

I love people that just hurl out vacant insults, never offering any evidence or even thought about anything. I’m so glad I’m not you.

Should have gotten vaccinated.

I’m the classless one? Your idol goes around spreading lies, gets into public arguments about having to wear a mask, UNvaccinated, gets Covid, spreads it around, then drops dead of the disease, yet I’m the one that’s classless? Try another vacant insult. Your hero/role model is the dead one, not me.

Correct! He chose his outcome.

You can’t see it. But everyone else can.

I love how you’ve decided you speak on behalf of all of humanity. Rather than just another vacant insult, do you have any ability to come up with any thought, about anything, on any topic, or is that asking too much? Why don’t you tell us how much you admire super-spreader Meat Loaf. Give us a thought about something, really anything. We’re waiting.

You must be a weho city hall employee.

Hun, you are in the minority with your trashy MAGA anti-vaxx boot-licking views in this city.

That is your only response and it’s getting tired.

Vaccines won’t cure your self loathing.

Is that your best standup “A” comedy material, or just some “test material” you’re trying out before you get to the really good stuff?