WeHo “Public Safety Commission” has voted to reduce the size of our local Sheriff’s contingent by 10 deputies, which is 16.7% of the force.

I am really unsure what WeHo council members are thinking …this is absolutely inappropriate in the light of the increase in crimes with weapons and the increase of low level crimes. It is alarming that our neighbors in Beverly Hills are focused on “real” Public Safety by continuing to strengthen the ability of Police, Fire and Emergency Management. I am shocked by this WeHo “Public Safety Commission”.

I am totally against what Mayor Pro Tem, Sepi Shyne and Councilman John Erickson are trying to defund the Sheriff’s department.

On January 12th I wrote: about Kristin Cook and the lack of enthusiasm for looking at the best practices of other cities across the nation as it relates to Low Level Crime, usage of security cameras or partnering with homeowners & businesses to incorporate their cameras into a citywide system.

On January 6th I wrote Kristin Cook … the Zoom Conference she held with WeHo West Citizens :

CORRECTION: A sentence reading “This will be voted on tonight at the WEHO City Council Meeting Agenda Item 4″ was not factual and was removed. The city provided the following information:

There are no proposed reductions to public safety personnel, contracts, or other related services in Agenda Item 4.A., Update of the 2021-22 Mid-Year Operating Budget, Work Plan Accomplishments, Capital Projects, and Living Wage Rate. The City’s Public Safety Commission did vote last week to make a recommendation to the City Council to reduce the number of Sheriff Deputies; however, that recommendation has not been brought forward to the City Council for action and is not included in tonight’s Agenda Item 4.A. There will be several public discussions regarding the future of community safety and well-being in the City of West Hollywood over the next several months and the City looks forward to community participation in these discussions.

I once was one of those residents clapping for the Sheriff officers walking in the Gay Pride Parade; proud for those Officers brave enough to come out of the closet within the Sheriff department. Boy, how times have changed, I feel those same Sheriff Officers of different sexes and ethnicities are now getting a slap in the face by my city. At the same time, I am afraid to let my family walk around the city for fear of them being mugged or accosted. We need more Sheriff presence, even if for a visible crime deterrent. I work in Hollywood,… Read more »

Can we please get a secondary law enforcement option like all large cities? Right now there is NO CHECK on the Sheriff. I suspect this is illegal. Rather than a police force can we experiment with law degree-carrying first responders who assign cases to specialized teams equipped with investigate crimes? Imagine that? If the first response needs force they are accompanied by “Marshalls”. My hypothesis is that we will not have a reduction in the crime rate until the “high volume” offenders regain fear of legitimate law enforcement. Get this law enforcement problem under control or we return to the… Read more »

The bottom line is I no longer feel safe in my own city. It’s shameful. I expect our elected officials to understand this and do something about it but they do not listen and instead pass their social experimentations for political gain. Deeply disappointing. We need new leaders now.

These debates need to be public

With the rise in crime in the city, defunding the Sheriff’s Department would be reckless, foolish and dangerous. It seems as though certain members of our City Council do not care one bit about the citizens of West Hollywood.

We don’t need more police. You all are just a bunch of racists that want to cause more harm to black, brown, indigenous, trans, non-binary people. Police are the enemy. #blm BLACK LIVES MATTER. DEFUND THE POLICE! Acab.

Generally, police seldom prevent crime; they are more likely to respond to it. Citizens often have a larger role inn crime prevention and the revision of our WATCH program is a step in the right direction. A broad look at criminal activity within our birders is offered by the La Brea press paper which showed the week of 2/6 – 2/12 to be one of the busiest since city founding. Don’t cut back on cops. Make a better partnership to meet our needs.

Less Ambassadors more Sheriffs
Shyne, Horvath and Erickson and public safety director and commissioners are a bunch of morons.
Let’s start the recall for S.H.E 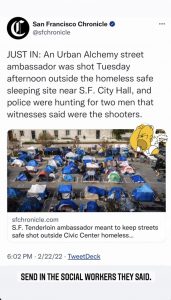 I agree we need law enforcement but when you call Weho Sherrif dept they don’t send anyone out. It is almost like they are denying service on purpose.

Maybe they’re understaffed and need to prioritize. Seems like this will make it even worse.

Alex, what item on the agenda tonight calls for this? If you read item 4A there is no mention of any of this.

WeHo resident’s were concerned about reducing the police because the Public Safety commission just voted to reduce the WeHo Sheriffs by nearly 20% before Council took up the approval of the mid-year budget.

This current council is so woke and wacky, and out-of-touch with what resident’s are experiencing—who knows what they would of done.

Thank you Alex for this open letter to the City Council Members. We all hope they are listening to the people that put them in their seats! It’s unimaginable that the “public safety” commission would consider recommending to the council to cut the number of sheriff’s deputies that service West Hollywood and keep us all safe – especially in the light of the fact that CRIME IS ON THE RISE.

They all have secret wehoville accounts.