When I first arrived in WeHo back in 1971, the large building on the northeast corner of La Cienega and Santa Monica was inhabited by a bowling alley called La Cienega Lanes. The origins of the building are pretty much forgotten by now but it is known that TV host Art Linkletter was part of a group that bought the business in 1946 and renamed it Art Linkletter’s La Cienega Lanes. The establishment was featured in the 1956 film noir “Man in the Vault” before closing in the late 1970s.

Since I never got into bowling, I didn’t patronize La Cienega Lanes but do remember that in 1976 the record label for the legendary rock group The Who threw a party at the alley promoting their new album. I was working for the music biz trade Cashbox at the time and one of my co-workers was invited to the bash. He declined, saying “There’s no way I’m going to be locked in a bowling alley with Keith Moon.”

In 1979, the most memorable and notorious incarnation of this location opened – Flippers Roller Boogie Palace. Named for co-owner Ian “Flipper” Ross, this hedonistic roller rink was called “Studio 54 on wheels” by actress Jaclyn Smith. From the night it opened, Flippers was a magnet for the famous and would-be famous, the place to be seen and hopefully, photographed.

When it opened in July 1979 Flipper’s was an exclusive, member’s only club with $200 annual membership fees for only 1,000 members, who also had to pay $7 per visit. Since some VIPs seemed to be there every night, those fees could add up. This policy lasted until February 1980 when the club opened to the public, which probably robbed Flipper’s of some of its celebrity cache but made it a popular hangout for locals.

The roller disco shone brightly during its short heyday, hosting concerts by hot artists like the Ramones, the Go-Gos, and John Cougar. Famous regular patrons included Olivia Newton-John, Jane Fonda, Cheryl Ladd, Patrick Swayze, Robin Williams, and Cher, who was rumored to be a part-owner. The extravagantly decorated roller rink was a natural for filming and Flipper’s got its closeup on the TV shows “Charlie’s Angels” and “CHiPs.”

At least part of the club’s allure was based on its ability to attract an interestingly eclectic clientele that included gay and straight, punks and disco dancers, celebrities and wanna-be’s. Frequent patron Cher commented for the book “Flipper’s Roller Boogie Palace 1979-1981”,  “Flipper’s was amazing. All the girls would get into their best bojangles and tightest, smallest cut-off tank top. You could go there and lose your mind in skating. Be free to get out of your own head.”

All good things have to come to an end and for Flipper’s the end came on Halloween night of 1981. After the much-lamented demise of Flipper’s, the space was acquired by the owners of the trendy Esprit de Corp apparel line. Following a very long and expensive renovation that included a three-story parking lot, the Esprit flagship store opened in December 1984.

After the 1994 closing of the Esprit store, the property stood vacant for a decade before becoming the Sav-On (later CVS) drugstore that stands there now. Since it’s the closest chain pharmacy, I drop by the store occasionally but can’t help thinking that this is a pretty dull fate for a location with such a colorful history.

Thanks Linda! I love hearing about roller disco culture, wish I had a time machine to experience it first hand.

I thought this was a story about commissioners on the PSC. 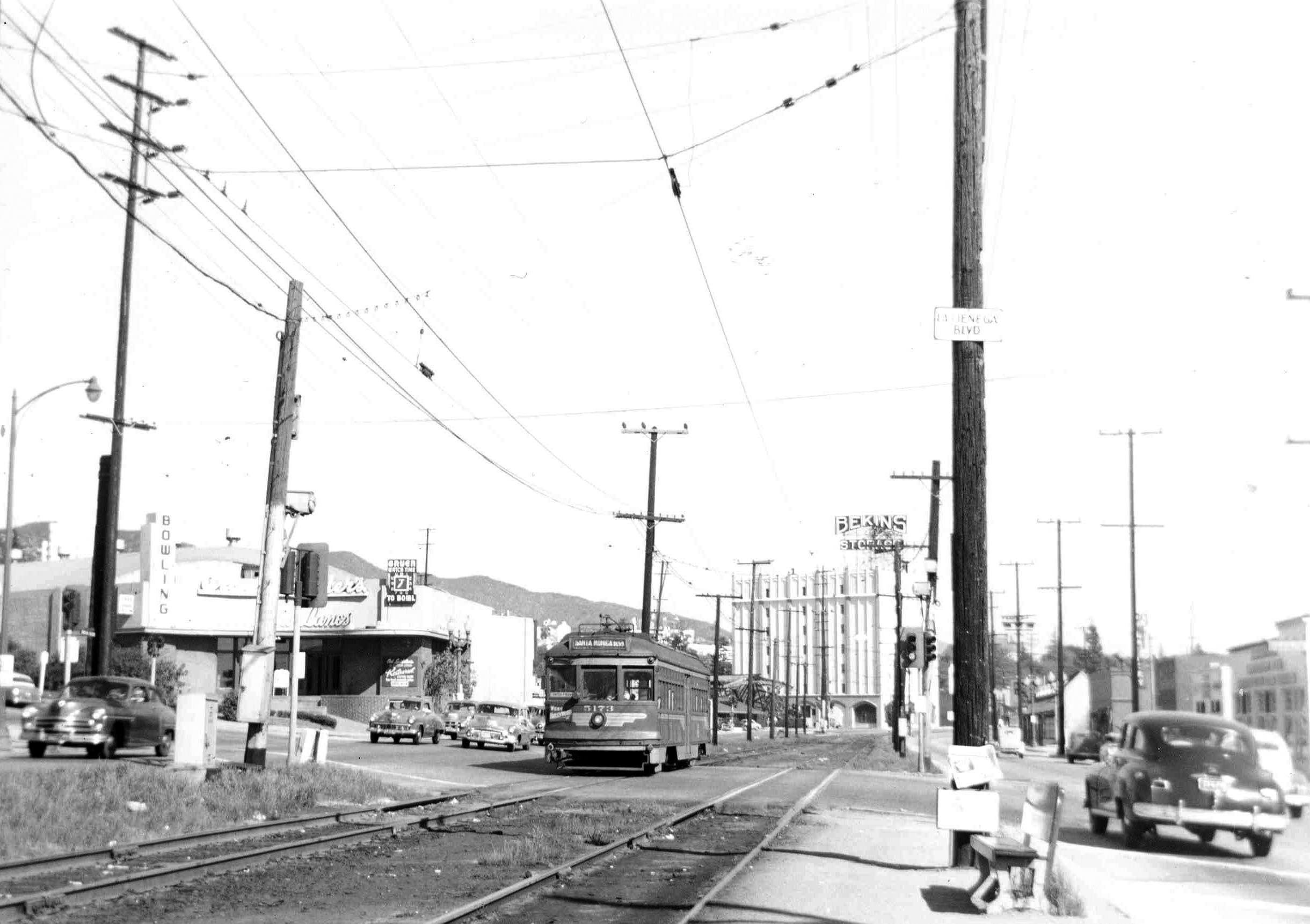 Wish we still had the tracks down SMB 😔

I recall standing in line to get into the Troubadour and seeing a train go by.

I’ve heard that freight trains were running as late as the mid-70’s. The above website waterandpower.org has a picture of one running at SMB and Crescent Heights.

The residents of Sherman voted to change the name to West Hollywood in 1925.

Sorry. I meant to say before West Hollywood was incorporated.

It would be great if Flippers was still there as a part of West Hollywood nightlife today, as something definitely different and fun, they at least have the roller rink on Sunset outside this summer, and they did this downtown this month as well outside. I think people put a lot more into going out in the 70s-90s before the personal tech era dissolved a lot of the need to in order to connect with people.

For anyone interested, here is the episode of Charlie’s Angels (Angels on Skates) filmed (assumed) at Flipper’s Roller Boogie Palace. https://www.dailymotion.com/video/x6tptd6

The Website queermaps.org confirms there was a gay bathhouse in their lower parking lot level, called “Rogues”, from 1980 to 1984. Anyone have any memories they want to share here?

I could be wrong, the gay batthouse may have been under Flippers rather than the parking lot. There is very little info on it. There was also a gay batthouse on the north side of 3rd street I believe mid to late 70’s, near Robertson. Close to the weho border.

8709 closed down in the mid-80’s due to AIDS making bathhouses really risky. Cedars-Sinai now occupies the space at the north-west corner of 3d street and George Burns Drive.

Before the parking structure was built there was a small gym on that spot. Can’t remember the name,

This was a great piece on Flipper’s. What I wouldn’t give to go back there for one day. If anyone has a DeLorean that has 8,000,000 gigawatts that I can borrow for a few days, let me know. (*Someone once told me that Flipper’s is also the first place Prince played when he first hit L.A.)

My recollection was that Flippers, along with The Speakeasy up on West Knoll off Santa Monica Blvd., were places that drew a large African American clientele. Flippers really reflected the spirit of the incorporated West Hollywood.

Thanks, Linda! I love your local history stories. I arrived here during the Esprit days and I heard so many wonderful stories about the bowling and skating that came before it.

When I first moved to the West Hollywood area in the early 1970’s the gay bowling league had regular nights at this bowling alley. It was amazing fun and truly mind blowing to me that we could be so openly ourselves and enjoy the areas very best amenities in the midst of LGBTQ comradery.
The Esprit store was a marvel designed by the brilliant interior designer Joe D’Urso. I was so sorry to see it close and although I appreciate CVS’s services to the community, its bland reuse of what had been a remarkable space, still saddens me.

I thought the Esprit store was attractive but the merch was overpriced.

This old Flipper location sounds fun.I guess just like bowling,roller skating is out of style.Both activities are communal,but that type of feeling is going away in our increasingly impersonal society.

Too bad the article didn’t have old photos to show what the place was like in the 1970s.Real bell bottoms would have been shown.

I sold a TON of Levi’s “elephant bells” back in the day (huge bell bottoms that looked ridiculous even then)….but awwwww the memories of those days!

I had a few of those back then! I hear they’re back in style.

There’s a book I mentioned in the post that has a ton of photos but the publisher would probably get on our case for copyright infringement.
https://www.vogue.com/article/flippers-roller-boogie-palace-book-liberty-ross

What a great story! (Had totally forgotten about the Espirit store.) Reminders of our history make West Hollywood richer and more interesting than the next horrible news item about it.

I had pretty much forgotten about it, too. I got my Esprit tees from TJ Maxx and Marshall’s where they were cheaper.