Hi Alex, I’m only here to solve the problems of Public Safety. So, I’m gonna put a voice note down, and we’re gonna stop every five or six minutes so they can transcribe it.

You got it. West Hollywood is a very important community for the department and for the county. Lord knows it gets targeted between the homophobia, the hatred, and the opportunists, smashing grab robberies. The conglomeration of things that can go bad unless we’re dedicated.

So, here we go, Alex, thank you so much for the opportunity to get past all the bullshit and talk directly to you. It’s a long list of questions. We have a few segments, The first is about you, the second will be about the department and the issues, then we will get into West Hollywood as it relates to the department. Ready to go?

Let’s start with you. Where did you grow up? How did you get into law enforcement?

Oh well, I grew up in between upstate New York and Puerto Rico — that was my upbringing. The military brought me back to the United States and I wound up in Norton, Air Force Base, San Bernardino. And from there Cal Poly Pomona and then the Department.

You’re married with a kid? And she’s retired.

She’s retired, I have one adult son, who is now a Deputy Sheriff and I have three granddaughters.

And your wife was in ex member of the force, so your law enforcement family.

Did you grow up in a law enforcement family?

No. I’m the very first time out of my family.

What part of Update New York?

Ah, I went to school in Upstate New York at Fredonia. Were you on the force during the Rodney King riots?

Yes I was working patrol.

How does that compare with the protest of the George Floyd verdicts?

It was night and day. What I saw on the ground as young deputy in 1992 were the failures of Sherman Block and Daryl Gates. The horrific mistake they made not to do anything initially. And then the only images that were telegraphed around the world was “you can do whatever you want, there’s no cops.” And that just lit the entire city on fire. So fast forward to 2020. Now I’m in the hot seat and I remember what they did and my goal was not to do anything they did. Do the exact opposite. That’s what we did.

The city didn’t burn down, the county didn’t burn down. No one died as a result of it. No major injuries on our part. And I think it was a successful operation. We had 20,000 people here protesting peacefully right in front of this building. No one went to jail. No one was hurt. And people were able to exercise their First Amendment right, which is very, very important. And that’s how it’s supposed to be. And the places that did have problems — Fairfax, Santa Monica, Long Beach — all shared one common thing: political folks, the politicians, telling law enforcement not to do their job. And it blew up in their face.

During the riots I understand you centralized command within West Hollywood. Ramirez told me that there was special attention, and they put a lot of sheriff’s deputies into the base there and that wasn’t part of any overtime charges. That was where your command center was to react to any violence.

So that’s a true statement, We had extra protection in West Hollywood that was not part of any billing contract or overtime charges.

No, everything we did during the riots was a result of civil unrest. And what they call unusual occurrences. As the Sheriff I’m responsible for coordinating mutual aid for LA and Orange County. So I ordered up the National Guard from the State Office of Emergency Services. They sent down Guardsmen, and then we had mobile field forces from other jurisdictions, Orange County and we put all those people to work in areas of violence or potential violence and West Hollywood definitely fit the bill.

In 2018. You ran as a reformer and I learned that you were the first Democrat to be elected to be LA County Sheriff, in 138 years.

I also became the first Puerto Rican sheriff ever. In the whole nation.

Oh, I didn’t realize that. But you inherited a system that was baked in 138 years of conservatism.

Then you go right into 2019 and it’s the Covid epidemic and the riots.

You didn’t catch any breaks, Have, you had a chance to enact any of those reforms?

Yes, as soon as I took office, we enacted massive reforms, we launched the Body One Camera program.

Is that an Axon program?

Yes, it’s an Axon program, they save the storage in the cloud. The previous sheriff abandoned the program in 2017. They gave up. They said it was too expensive, two cumbersome. So when I took office the very first week we sat down and said we need to make this faster, better and cheaper — how can we do it? We put all the toys on the table and mapped the way forward. And it took us all the way till October 2020 when we finally cleared all the red tape with the County Board of Supervisors. You would think they would have championed the cause with us. No they were actually resisting getting the program launched. So we finally overcame all the resistance of bureaucracy and the program has worked incredibly well.

My first week in office we kicked ICE out of the County Jail. That was a campaign promise. It worked wonderfully well. We followed that with a permanent moratorium on ICE transfers. So we established a bright line of separation between local law enforcement and federal immigration enforcement. Both jobs need to happen but you can’t mix the two jobs together — because then people no longer trust you. Those are big reforms. Those moved the needle nationally because I was the first sheriff to do this. And we got death threats from certain camps behind it, got hate mail from the Trump White House. So you would think that would have been a something that people hailed and appreciated especially from my own party but actually, curiously, it was not even reported in the LA Times. They just refused to cover it.

OpEd: Why I voted Villanueva - WEHOville

[…] If you missed the Villanueva interview here’s a copy. […]

Get Real People – while I was listening to excellent Alex V interview this was going on Huntley Dr — Sepi S. & Lindsey H. ambassadors said they would be there in 4 hours. The Sheriff & Fire Dept showed up to get him on his way. He, of course, being of not sound mind and body, refused any help from social service that our men in uniform offered. !!! Do NOT cut the police force !!! Citizens of WEHO you are fooling yourself thinking these Ambassadors are going to protect your city. By the way::: additional info The person… Read more » 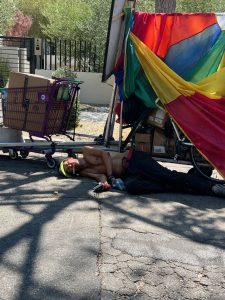 What an eye-opening interview. Nice to see coverage on topics no other outlet will publish.