“This slate of candidates will work to ensure that the workers who make up the backbone of the city’s economy have a voice in the policy decisions that affect their livelihoods,” said Kurt Petersen, Co-President of UNITE HERE Local 11.

The labor union’s endorsement typically comes with help in the form of campaign mailers on behalf of the candidates which inundate residents’ mailboxes around election time.

UNITE HERE helped to propel Mayor Pro Tem Sepi Shyne and Councilmember John Erickson into office in the 2020 election. A year earlier, they supported Lauren Meister in her re-election bid.

Times have changed, however, as Meister resisted their pressure to approve an ordinance related to hotel workers’ wages, the implementation of which she disagreed with.

Speaking to supporters last month, Meister implied some of her colleagues had simply taken cues from “a special interest group who had been helping councilmembers get elected for just that purpose” — likely UNITE HERE Local 11.

“And I will say, in 2019, I was endorsed by that special interest group — but that did not stop me from voting ‘no’ on an ordinance that I felt would hurt our hoteliers in a city where hospitality is one of the most important industries.”

NO PLACE IN WEST HOLLYWOOD!

What a cynical ploy by this self-serving union! Endorsing the worst three candidates for city council is creepy and transparent, but they did succeed in poisoning our city with the Shyne/Erickson disaster.

Can you imagine what this will lead to? We already had 2 city council buffoons protesting with Union Here Local 11 outside Cedars-Sinai earlier this year protesting to add hospital workers to their membership. Fortunately, most are not eligible to vote despite the blitz of relentless proper gander destined to block WeHo mailboxes.

The last thing that this city needs is these three. And God help us if the union gets any stronger than it is already. It already has such a strong foothold in this city and it’s pretty much running the show as of right now. We need to fight back and take back our city! Meister, Heilman, and Duran! Put the common sense, intelligent grown-ups back in the room!

Let us UNITE against this terrible excuse for a union. They have succeeded in hurting the residents of West Hollywood for way too long. We all pay more for food and everything else in West Hollywood due to their unethical activities.

Endorsing the three most horrid candidates in the race underscores their intent to harm our beloved city.

They want more weaklings like unethical Erickson and Shyne to do their bidding, but let’s do the right thing this election!!

Terms like “left-wing” and “woke” aren’t insults. The only people using them as such these days are racists, bigots, and far right extremists like the kind who led a failed insurrection against the United States.

Spread the word! NO on Unite Here’s anti Semite, five minute resident, and a candidate voted to defund the police!

Robert Oliver’s candidacy is an insult to civil society
https://youtu.be/tsPzmRIv9QI 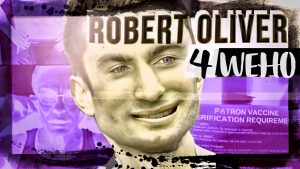 Oliver wants to be part of the new She! Slimy Erickson and the revolting Shyne! He’s another streetwalker for developers like the ludicrous Horvath.

Unite Here’s endorsement started with a lie by saying that Byers (five-minute crowd and anti-Semite), Wright (five-minute crowd) and Oliver (who voted for the motion to defund by $3.6 million, setting off a period of angst and division in this city that continues to this day) RAISED the min wage. That is a lie. They also said that Duran was a no vote on raising the min wage–also a complete lie. Standby for a barrage of lies, mistruths, deceits and manipulations as they flood our mailboxes with it all. It’s going to be ugly; how will others be able to… Read more »

At this point, Lauren Meister is the only hope we have of maintaining some semblance of sanity on the Council. Long before being elected to the CC, Lauren has always been a very successful community leader with the best interests of both the residents & businesses in mind. She & the City Council are a perfect fit. (Lauren is a good argument against term limits.) Steve Martin also has my vote, he & Lauren make a good, very capable team with sound, dependable judgment, which we need more of right now.

UNITE HERE Local 11 seems to be for the benefit of hotel workers, food service workers in corporate venues and airports. By and large they are neither residents of the city nor invested in any way other than obtaining wages. It seems a bold affront to the residents of West Hollywood to hijack them and hold them hostage by the dictates of Shyne, Erickson and the potential disrupters Wright, Byers and Oliver who are simply attempting to clime the political ladder. These individuals have proven to be wolves in sheep’s clothing, with all due respects to wolves and sheep, and… Read more »