Local artist Glamourpuss’ WeHo Life comic strip is a humorous look at the irony of elected officials in West Hollywood. Here he pokes fun at Councilmember Lindsey Horvath and the Santa Monica Blvd. mural painted on her behalf. In the comic strip, Horvath swears publicly to uphold WeHo’s laws but is silent on the code violation her mural received. Two weeks prior Horvath voted in favor of the re-iteration of the Factory project in a 3-2 vote. The obvious quid pro quo is expected to be declared as an ‘under the minimum’ campaign donation in an upcoming filing by Horvath.

Queen Clown Horvath to get this far in publicity may be deliberate for attention or just ignorant fueled by hate with the failure with Shiong Soon to the public outcry’s to defund the police. Having the audacity to run a campaign for county seat based on don’t say West Hollywood.
This charade is pure narcissistic Trumpism.
Can you imagine Clown Horvath as county supervisor?

Keep it up- the memes, not the mural! 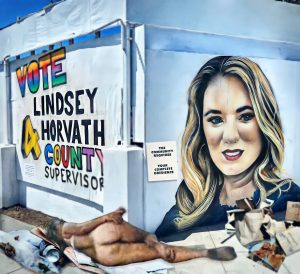 Horvath’s streetside blemish is still up as of today. A homeless person was sleeping in front of it. BBB Alert!!!

I had no idea how dreadfully tacky the mural is! But what can you expect from Lindsey Horvath, a middle-aged transplant from East Cleveland? Faring’s new streetwalk for developers, the dreadful John Erickson must have done the artwork. Very Oshkosh with a touch of South Vegas!

“Smell a Rat” is correct. Why has this mural not been taken down. Its obscene to have to see it every day on my way in and out of the City.

Cant we rather have a mural of our Captain, LT and some Deputies?