Lindsey Horvath dragged WeHo into the crossfire last year when she had City Hall admonish the sheriff for probing the affairs of her political ally.

County Supervisor Sheila Kuehl was escorted barefoot out of her Santa Monica home at the crack of dawn today as L.A. County Sheriff’s Department deputies executed a search on her property related to a felony bribery investigation.

The search warrant, signed by L.A. Superior Judge Craig Richman, allowed authorities to seize documents and evidence on Kuehl’s property that were connected to Peace Over Violence, a nonprofit organization run by Kuehl’s friend and political ally Patti Giggans.

The Sheriff’s Department has been investigating Peace Over Violence over a controversial, publicly funded domestic violence hotline that suspiciously few people have ever used. A Fox 11 report calculated that the program was costing about $8,000 per call. Giggans, the nonprofit’s director, was also appointed to the powerful Civilian Oversight Commission by Kuehl, and both have been fierce critics of Sheriff Alex Villanueva.

As deputies confiscated her phone and took photos in her house, Kuehl called the search “totally bogus.”

Meanwhile, investigators were also searching Giggans’ home, the Peace Over Violence offices, the L.A. County Hall of Administration and the headquarters of the county’s Metropolitan Transportation Authority, which gave contracts to Giggans’ organization.

Giggans lashed out as her car was towed away and deputies removed hard drives and computers from her property. The investigation into Peace Over Violence began last year when a former employee accused Supervisor Kuehl of helping the organization acquire the contract to run the hotline.

In September 2021, Councilmember Lindsey Horvath involved West Hollywood in the imbroglio when an agenda item she authored directed city staff to correspond with the sheriff and other departments relaying WeHo’s opposition to the use of funds to investigate Peace Over Violence. Nine months later, Horvath’s crusade against the department culminated in a major budget reduction that will leave West Hollywood with fewer deputies on patrol.

Horvath is currently in a runoff race to replace Kuehl, who is retiring as 3rd District County Supervisor at the end of the year. Kuehl is heavily invested in Horvath’s race, endorsing her on day one and publicly attacking Horvath’s opponent, Sen. Bob Hertzberg.

OMG and it’s all about The Sherriff going after opponents. Meaning Trump politics at its best. Horvath a looser with Kuehl.
Why would you give a judge ammunition to go after you in the first place babe.

I can’t believe Kuhl has finally been caught on her hotline corruption. Now watch the corrupt propoganda media and corrupt liberal Judges run to cover it up. The only person doing their job in this rotting city is The Sheriff. No wonder they hate him he’s got dirt on all of the corrupt Supervisors.

The first thing Supervisor Sheila Kuehl should do is immediately go to court and request a Special Master! Just sayin’.

Lindsey Horvath is so TOXIC. Seems everything she touched turns sour. Cant wait until she is gone from WeHo forever.

Lindsey Horvath, like many other WEHO City Council Members, regularly instruct City Staff to get involved in matters that are not part of their duties. Often these instructions are unethical or cringe worthy. The question is – why haven’t City employees reported this to their UNION?!?!?

Why haven’t they reported to the Sheriff Horvath’s connection to the 800 dollar a call corrupt “rape hot line” and what kind of kick back could she be getting from her two friends who’ve given campaign money? West Hollywood is so corrupt and Horvath could lecture on it rather than gender studies.

County Supervisor Shelia Kuehl has a new gig to add to her television resume – REALITY TV a la COPS! This hotline has been a money making scam from the start and hopefully all parties will finally be held accountable – including the folks in charge of the ‘laundry.’

An investigation of an elected official of this sort should have included the FBI, the State’s Attorney General (CA DOJ), or at least the County District Attorney’s office, but it didn’t. This was and investigation ran entirely by the Sheriff’s Department which is led by an out of control political opponent. There’s nothing about this investigation that seems credible at this point.

I agree with Steve, this is nothing more than an outrageous play by Villanueva to pander to his MAGA supporters.

No on Steve Martin. The bombastic fool pitched endorsing the dreadful Horvath until he realized she was about as popular as Hitler in Israel. Oh yeah, bring in the corrupt FBI and any part of the totally dreadful Nazicrat run California. Or anything to do with Horvath’s backers? Go Sheriff and make these three women’s live miserable in investigating the 800 dollar “rape” call line! As for Horvath, ship her back to East Cleveland on a rail with Shyne and Erickson. The SHE are the enemy of WEHO’s future!

Villaviejo is a MAGAt hiding behind a fake Democratic affiliation. He needs to go the way Leroy Baca did…out.

I caught Kuehl’s interview on tv. She is bizarre. Don’t know the extent of her guilt, but she comes across as really weird.

No one knows how Trump feels, since no one know how many and what drugs he’s taken at any given time.

Villanueva is seriously out of control.

Can’t wait to vote him out.

I can’t wait until Weho never has to look at Lindsay Horvath’s political face again! Next on the list are the dreadful corrupt Political hacks
Shyne and Erickson. So the SHE will Finally be in the political toilet. 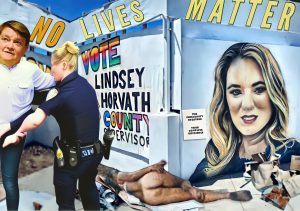 To make you ask questions? She’s quite the hot mess, though.