Nika Soon-Shiong’s infamy rose to new heights this month as a new POLITICO article details the disastrous impact she has had on her father’s newspaper, The Los Angeles Times.

The plucky daughter of billionaire mogul Patrick Soon-Shiong first showed up on our radar in January after Councilmember Lindsey Horvath awarded her a spot on the Public Safety Commission. (Despite other publications’ claims, WEHOville was the first to write about her). Few could have predicted that in less than 12 months, she would totally upend public safety in WeHo.

But while Nika was busy crusading against the Sheriff’s Department, she was also creating havoc in the L.A. Times’ newsroom, according to POLITICO.

In May, she publicly derided a junior reporter on Twitter for daring to write a crime article without a negative spin on the sheriff’s involvement — the first glimpse for many in the newsroom of what was to come, as the POLITICO article details:

“Some journalists at the Times and well-known political figures recoiled as the younger Soon-Shiong’s political views and activism became more visible and — they believe — crept into her relationship with the paper. After Nika Soon-Shiong received an appointment to serve as a West Hollywood Public Safety Commissioner — which advises city government on public safety reforms — Times journalists said she had, on at least two occasions, pitched them on the commission’s work and complained about headlines.

One senior reporter at the Times said it’s hard to know ‘where Nika starts and the paper stops.’

‘People who had good will toward the paper don’t and it’s because of her and what she’s doing,’ another reporter said.”

Then the L.A. Times released endorsements for June’s primary election.

Their pick for County Supervisor (Third District)? None other than Lindsey Horvath, who laughed off the idea that were was a conflict of interest or appearance of impropriety. Why wouldn’t she get the endorsement of the newspaper owned by the father of the friend she appointed to a powerful position and defended in the face of withering and accurate criticism?

Now back at Oxford finishing her doctoral degree, Nika brushed off the idea that she “controls the editorial decisions of the paper” in an interview with POLITICO, stating plainly that she does not “have a formal role in the LA Times.” She does, however, describe herself as a Special Adviser on her resume and a Times e-mail address.

WeHoans, for their part, are glad that Nika’s days of toying with their lives and livelihoods are over.

“Time to go Nika,” wrote one commenter. “You are a burden to our city who is wasting precious time with grandstanding aspirational prattle with no positive outcome whatsoever.”

“Nika is misguided, and ignorant, and good riddance,” wrote another.

Nika blogged her response to the POLITICO article below, complete with flow charts.

It is true that the Daily Mail, Fox News, NBC, NY Post, Washington Times, LA Magazine, Breitbart News, Fox LA, Overtimer reported on the City Council vote to reduce the WeHo contract with the Sheriff before the Los Angeles Times. This narrative has been supported by the National Fraternal Order of the Police, Pro-life Attorney General of Florida, and OJ Simpson.

As with other places in the country, mass media has reported on the false narrative that crime is rising in the city, or focused on anecdotal incidents of crime. What isn’t covered in this deluge is a deeper, more existential threat: how the largest sheriff’s department in the world uses taxpayer dollars.

Crime in WeHo is at pre-pandemic lows. Hysteria over a 137% rise in crime was based on a comparison between ONE month in 2021 and ONE month in 2022 as if nothing happened in between (i.e. COVID). When asked for more detail, LASD attributed this spike to pickpocketing at newly reopened clubs, of which LASD recovered 2 of 249 with 60 deputies. Below is the complete data on crime, linked to LASD sources: 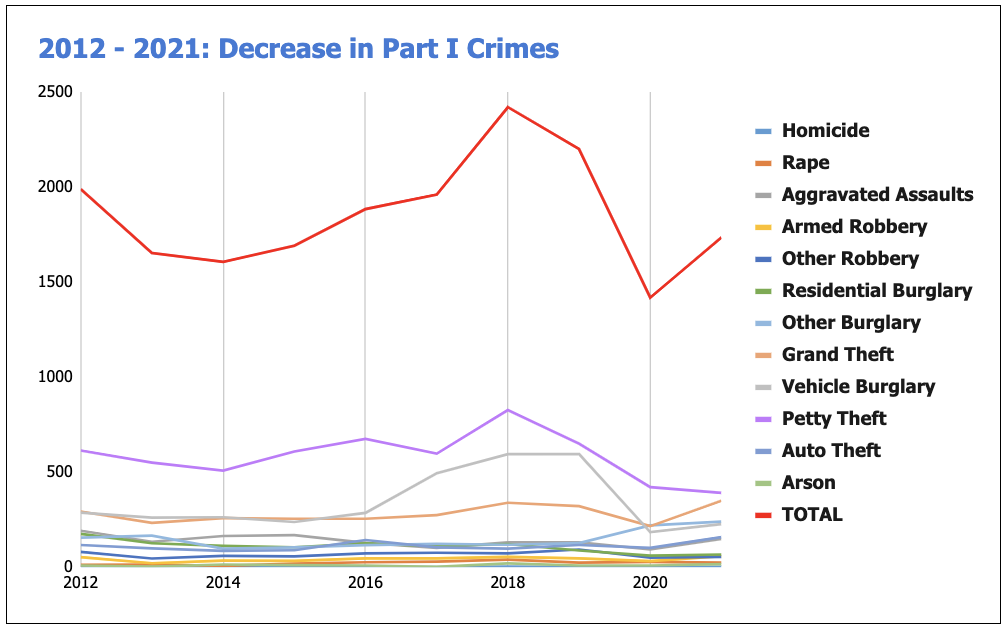 Since 2012, the price sheriffs charge contract cities has risen by over 100%. This means that cities pay more money for fewer sworn officers on patrol. In 2011, $13.7m paid for 67 deputies. In 2021, $20.6 paid for 60 deputies. The complete data on contract costs, from the LASD, reveals there is no correlation between spending on the sheriffs contract and crime reduction. 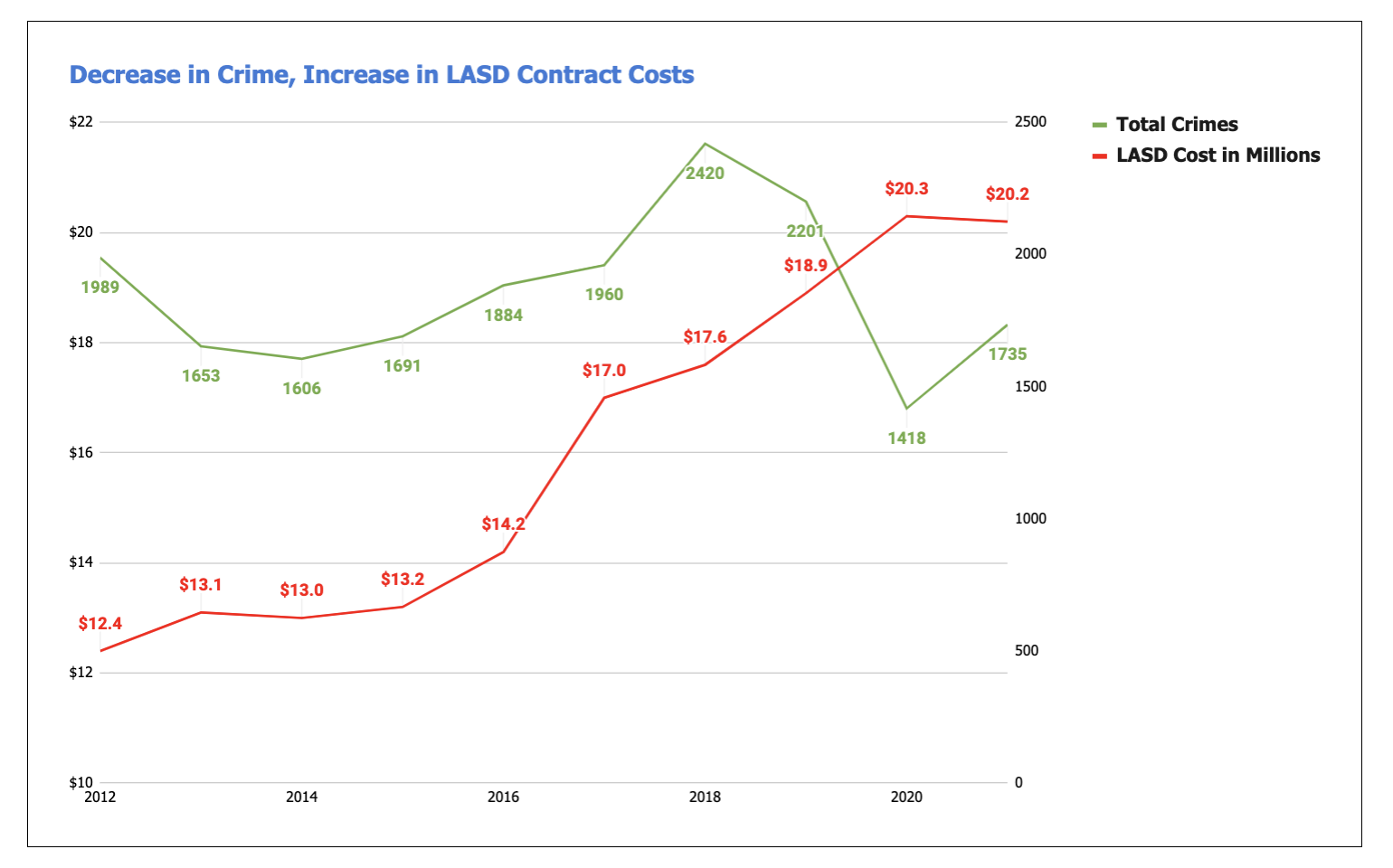 Community based social services are a more effective, fiscally responsible investment in public safety. Whether it is the LA Times, whose coverage I do not contribute to, or other outlets, what we understand as breaking news items often relies on the Sheriff’s department. Undersheriff Timothy K Murakami had a  reported pay of $343,001 according to public records in 2020, and refused to testify to the Civilian Oversight Commission on deputy gangs. At these hearings, the former Chief of Staff to Villanueva admitted to being a member of the Grim Reapers.

MY ROLE AND GENERAL CONFLICT

For months I sat on the Public Safety Commission with no fanfare, until Sheriff Villanueva posted a video about me on his personal Facebook. The fixation has nothing to do with the substance of my efforts as Public Safety Commissioner. What should receive more coverage is the contract corruption by the LASD. Just today, the department raided the homes of Supervisor Sheila Kuehl and Civilian Oversight Commissioner Patty Giggans.

Crime went down since my time on the Commission, and this vote was supported by the community. Re-imagining public safety means transforming the conditions that lead to harm in the first place. It means rejecting the inevitability of our County continuing to top world records in terms of the incarcerated population of people with mental health needs, or the number of killings at the hands of law enforcement. I hope that the next young woman of color who wants to learn how the government works – and how it can be improved – is not deterred.

I am currently in the fourth year of a PhD program at Oxford University where my research focuses on cash transfer implementation systems. I am also the Founder and Executive Director of the Fund for Guaranteed Income, which builds cash transfer systems and community-designed technologies to improve the safety net in the United States.

I do not have a formal role in the LA Times. The suggestion that I control the editorial decisions of the paper, which are made by independent and experienced journalists based on their own judgment, is not true.  Sometimes the endorsements of the editorial board match my own preferences, and many times they do not. In this case, I think endorsing Bob Hertzberg’s opponent should be an easy choice for anyone who cares about the safety and prosperity of their community. I advocate for these things in my academic work, through the non-profit I run, and in my advisory role with the L.A. Times. I have spoken up in the past and will continue to do so in the future.

Bob Hertzberg, the candidate supported by the sheriff, has overseen the brutal, forcible evictions and arrests of houseless people in his district. We have high rates of violence as a society, and we also have the highest rates of incarceration in modern world history. There are profound problems with the media’s coverage of safety issues, and these problems sometimes manifest themselves at the LA Times, just as they do at virtually every other major outlet. It’s important that we have actual conversations about these issues on the merits, and not be distracted by personal attacks.

Nika Soon-Shiong as far as I can tell has no journalism experience to be any kind of advisor to the Los Angeles Times.Her father allowed her access to the newsroom just because she is his daughter.She says she does not have a formal role at the paper,but I am sure she had an informal role there. Too bad the newspaper people at the Times did not get together as a team and had it out with the owner.They would have told him his daughter did not fit in the newsroom and that she did not have any journalism experience to… Read more »

Nika Soon-Shiong just go away, We do not need people like you poisoning WeHo. BYE BYE

I stopped buying the LA Times when my parrot died.

She goes in the books as one of the worst moments in weho history.

Dear Nika, your science experiment was a failure and will receive an F-. Please don’t visit us again. Thanking you in advance.🙄

I had no idea of the relationship. Explains everything. The Los Angeles Times has become one of the worst woke-joke publications in America.

She’s a pathetic joke and should be deported along with the sycophant LA Times.

The Certificate of Incorporation for Fund for Guaranteed Income states no part of the activities of this corporation shall attempt to influence legislation. Directly or indirectly participate in or intervene in any political campaign.

Soon Shiong and her comrades on council, particularly Erickson (“I’ll say it five times!”) and Horvath, have a fetish for decrying the “hysteria” over a 137% rise in crime from one month in 2021 to the same month in 2022. Now they are parroting their celebration of a reduction in crime using the same month in one year to month in the next year analysis. Soon Shiong’s reliance on robotic cherry-picked numbers (with a particular emphasis on pick-pocketing) disrespects the lived experience of people who reside here, and have called WeHo home for a long time. We see and feel… Read more »

Lindsey Horvath, Shiong and Erickson are all DISGUSTING people who need to get out of West Hollywood. They ONLY present stupid topics that will ONLY benefit themselves and NOT the City of West Hollywood!!!

Not sure what a PhD in “cash transfer systems” has to do with helping world poverty but I’m sure she’s spending daddy’s money in Oxford well. But she’s gone, right?

I stopped reading The Los Angeles Times because of Nika Shiong and her callous attempts to hurt the residents of West Hollywood.