Mark Bryan Kellam of West Hollywood, CA, 61, passed away unexpectedly surrounded by his family and friends on September 27, 2022. Born on March 30, 1961, in New Castle, Indiana, Mark attended Indiana University and graduated in 1984 with a degree in Journalism.

In 2001, Mark moved to Chino, CA. He quickly received an editor’s position at the Chino Champion Newspaper. Mark worked for several local newspapers, LA Daily News, Los Angeles Times Community Newspapers, and his most recent job as a reporter and copy editor for outlook News Group and had a storied career with Glendale- and Burbank-area newspapers.

Mark loved cats, the ocean, theater, dancing and singing, especially Karaoke. For many years, Mark was a member of the LA Wrangler’s country dance group. He was also known for his playwriting, by having plays produced in New York, Dayton, and Indianapolis.

In 2002, at Revolver Video Bar, Mark met the love of his life, Jeffrey Waack and in 2004, Mark moved to West Hollywood to be with Jeff. As soon as same-sex marriage was legal in the state, Jeffrey and Mark married on October 23, 2008, in WeHo’s Kings Road Park. Jeff and Mark could be seen walking hand-in-hand down Santa Monica, from Sweetzer to Robertson, several times a week. Sometimes stopping to eat at their favorite restaurant, Basix, where Mark had proposed to Jeff, or their favorite watering holes, Mickey’s and Revolver, before making the journey back home to Sweetzer, hand-in-hand.

Rest in peace. He sounds like he was a good guy. Sad to hear when stuff like this happens.

One of the sweetest guys I’ve ever known. Villa las brisa is an emptier place without him. We will all miss him so much in the building.

Mark will be missed by all of us who knew him. May his memories live forever!

Mark will be missed by many, but missed by no one more than Jeff and his family. It was a blessing to know Mark and share moments with you two at your home in WEHO… 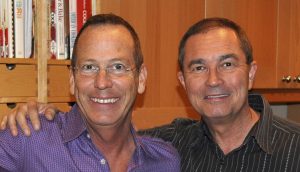 Rest in peace Mark. You will be missed forever.
Love,
Reuben Zadeh